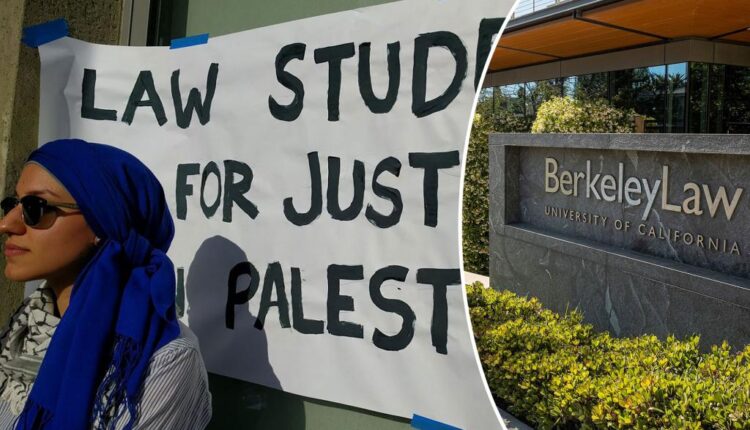 On college campuses across the nation, progressive activists have accelerated their efforts to silence and ban any talk of Zionism. Last month, in a campaign initiated by Law Students for Justice in Palestine (LSJP) at Berkeley Law at the University of California Berkeley, nine progressive law groups amended their collective bylaws to exclude speakers that support “Zionism, the apartheid state of Israel, and the occupation of Palestine.” The LSJP claimed it as a win for the boycott, divestment, and sanctions (BDS) campaign against Israel.

Woke ideologues have decided that campus freedom of speech is only for those who agree with them without the possibility for debate. And this particularly impacts Jews – particularly those who are Zionist. How has this happened? Like so much of left-think, this campus debate is pitting the “oppressed” vs. “oppressors.” In this case, “oppressed” Palestinians who must be advocated for and kept safe from their pro-Israel “oppressors.”

Along the way, pro-Palestinian groups like LSJP have the right to share their views, but pro-Zionist groups – not so much. And this leaves many Jewish students unable to defend themselves against increasingly hostile campus attacks.

David L. Bernstein, founder and CEO of the Jewish Institute for Jewish Values (JILV), and author of the new book “Woke Antisemitism: How Progressive Ideology Harms Jews” has studied the ways modern anti-Semitism has been rebranded as anti-Zionism — including on college campuses. “Oppressor v. Oppressed is always the default orientation of the woke left, whose ideologies equate power with depravity, and powerlessness with virtue,” writes Bernstein.

This ideology “has become so pernicious and so widespread that mainstream Jewish leaders have little chance to move the needle on progressive attitudes to Jews and Israel,” Bernstein adds.

Of course, this being the left, race has also been added into the mix. By classifying Jews as “white” oppressors, Bernstein argues, progressives seek to erase the history of discrimination and anti-Semitism Jews have endured for centuries. And this effort is clearly working. In a national poll commissioned by Bernstein’s JILV of likely voters released this week, nearly half (45%) view Israel as an “occupier/colonizer” and 47 percent believe Israel has too much power.

The exile of Zionism from campus life is hardly limited to Berkeley Law. In August, Jewish on Campus, a national pro-Jewish student-led organization along with the Brandeis Center for Human Rights, filed a civil rights complaint after Jewish students were kicked out of a rape survivor support group at SUNY New Paltz because of their Zionist beliefs. More recently, a University of Vermont teaching assistant proudly posted on social media that she would be lowering the grades of “Zionist students.” The US Department of Education’s Office of Civil Rights has since opened an investigation.

In 2020, New York University settled a complaint of anti-Semitism by a Mexican-Jewish student, but has yet to fully rid its campus of anti-Israel sentiments. In August 2022, for instance, an email distributed by NYU Law Students for Justice in Palestine referred to the “omnipresent Zionist grip of the media” and called the Jewish state a “colonizer.” Never mind that Jews have a connection to Israel dating back more than 5,000 years.

Meanwhile, just this week, Jewish students at George Washington University in St. Louis were met with flyers posted around campus that read: “Zionists Fuck Off.” And later, anti-Israel protesters gathered outside the campus’ GW Hillel where a former IDF intelligence officer was scheduled to speak, calling for Intifadah (Arabic for “uprising”) and shouting “Israel is a terrorist state,” and “GW Hillel, you have blood on your hands.”

Beyond the stifling of free speech is the issue of student security. A May 2022 Anti-Defamation League report on “Antisemitism and the Radical Anti-Israel Movement on U.S. Campuses, 2019” states that “some of the more radical expressions of anti-Israel sentiment can create an environment in which Jewish students… may feel besieged or threatened.” So much for academia and safe spaces.

This feeling of insecurity is growing beyond campus gates, says Julia Jassey, the co-founder and CEO of Jewish On Campus (JOC). Radical anti

-Semitic rhetoric is being carried into the mainstream, she says, as evidenced by Kanye West’s recent public tirades. Still, Jassey believes that student sentiments are often more rooted in confusion than hate; they simply don’t understand that anti-Zionism is also a deeply rooted form of anti-Semitism. And this rhetoric, she adds, is not exclusively limited to the far-left.

Blake Ziegler, a student at Notre Dame University and president of its JOC Ambassador Program, for instance, explained how right-wing campus anti-Semitism is mostly hidden from view — placed on on social media sites by unaffiliated groups such as America First ND (ND for Notre Dame University), which posts anti-Semitic tropes like Jewish dual-loyalty to Israel and Holocaust denial.

Despite these deep concerns, there are some who see the campus situation as less grim. Joanna Landau, the founder and CEO of Vibe Israel, an Israel-based non-profit “transforming the perceptions of Israel,” suggests that the view of American colleges as a hot-bed of anti-Zionism may actually be overinflated. Particularly among the very cohorts most-often associated with such viewpoints.

A March 2022 Vibe Israel survey of 900 Latino and Black college-age Gen-Zs in progressive US markets, found that 50% of respondents actually had a “favorable” or “very favorable” opinion of Israel, while 40% had no opinion at all. A follow up survey that included images of Israel saw a 111% increase in “very favorable” sentiments toward Israel, and an over 50% decrease in “unfavorability.”

Landau’s solution to anti-Zionist rhetoric is to focus on “better marketing” of Israel and “investing in the future of the Jewish people.” But attitudes toward Jews and Israel cannot improve if progressives continue their campaigns to threaten and silence Jewish and pro-Zionist groups from having campus voices in the first place.