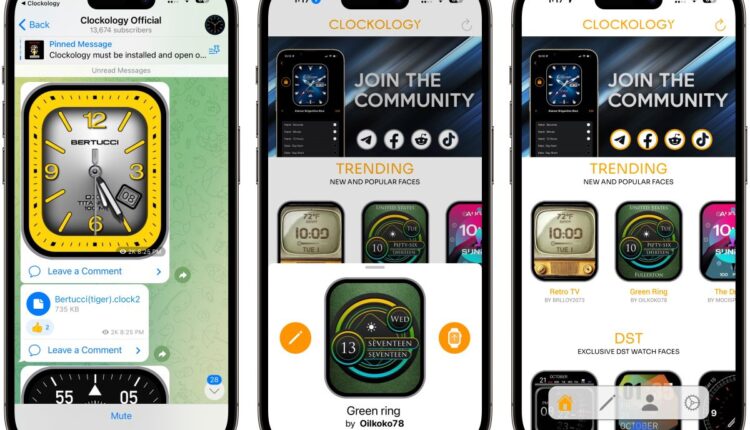 There are now 49 official Apple Watch faces available through watchOS 9. That sounds like a lot until you consider that some focus on Disney characters, while others include kaleidoscopes, Memoji, and the Breathe app.

I’m not against these, but rather highlighting that no one will love every Watch face Apple has released. Because of this, I have long advocated that Apple should introduce an official Watch face store. Then, if iMessages can get stamps and apps, Apple Watch owners should at least be able to show off a new Watch face 365 days a year.

Since I purchased my Apple Watch Ultra, I’ve become obsessed with finding an alternative solution to an official Watch face store. I spent a lot of time checking out Watch Faces at Facer, then looked at TimeFlik and Watch Maker. Each app offers a wide selection of third-party Watch faces, but none interested me.

Some people are attracted to Clockology because it allows them to be creative and post faces for all. I’m many things, but I’m not the creative type, at least when it comes to creating things like apps and Watch faces.

Don’t get me wrong; I like and use many official Apple Watch faces. The Wayfinder one, exclusive to the Apple Watch Ultra, is perhaps my favorite of all time. I get bored easily, so I want to see a different Watch face often, and Clockology delivers.

It’s important to note there are key differences between the Clockology and Clockology Faces apps. Both apps support watchOS Always-On; beyond this, there are key differences. The former works like a skin, offering faces that sit on top of everything else — including your default official Watch face. The Clockology app feels much more like the wild wild west, and I wouldn’t suggest this to anyone who wants a clean experience.

For example, notifications and messages will often bring you back to the native Watch face instead of the one from Clockology, which can be annoying. Even without notifications wreaking havoc, there’s another point worth mentioning. For the Clockology face to show continuously, you must put your wrist up based on the Return to Clock watchOS setting. The only options are Always, After 2 minutes, or After 1 hour. The Clockology app is also noted for offering data updates every time your wrist gets raised.

If you’re looking for a truly creative Watch face, the regular Clockology app is also the one you can use to download and install faces posted through the official Clockology Facebook app and through Telegram. Doing so takes just a few steps. However, there’s a slight learning curve here that could turn off some people.

The Clockology app is also the one that’s available for iPhone, iPad, and Mac, allowing you to use the app to create watch faces for those platforms.

The Clockology Watch Faces app is a very different beast as each face is built into existing watchOS complication areas. Data on these Watch faces get updated every 15 minutes (bad), but the face isn’t affected by messages and notifications (good).

On another good note, the Clockology Faces app offers an easier installation process. To get started, click on the face you want from the app, then follow the on-screen instructions, which take you to the official Apple Watch app on iPhone. From there, you can adjust the complications to match your needs just like you can with any official Watch face.

The Clockology and Clockology Faces apps offer freebie faces and tools, although “premium” options cost extra, running for as little as $1.99 per month, although yearly memberships are also available.

There are two final points about Clockology and the Clockology Faces apps I’d like to bring up. First, I have noticed watchOS’s Always-On display is a much bigger battery hog than Apple contends. I have seen this much more on the Apple Watch Ultra (which Apple promises up to 36 hours between charges) than other models with lower battery specs. With this in mind, when I started using Clockology apps, I was concerned battery life would fall even more. Luckily, that hasn’t been my experience, and I’d call it a non-issue.

Finally, let’s discuss what I like to call the “Rolex” or “Omega” oddity. For whatever reason, some Clockology fans love Appel Watch faces that impersonate more traditional watches right down to including real, trademarked logos.

I’ll admit to downloading a few of these faces and find them attractive on my Apple Watch Ultra. And yet, I can also see why some Clockology fans on Facebook criticize anyone for creating or using these types of faces. Regardless of whether the look works, there’s a certain ick factor for putting a digital NOMOS or Breitling face on an Apple Watch that’s impersonating a watch that costs thousands of dollars. Luckily, many other Clockology Watch faces don’t include a fancy logo, so there’s something for everyone.

My advice: Try both apps and see what you think. Each comes with a free trial for the premium content. And, as I said, there is still free content, regardless.

Republicans have to rethink strategy after the red trickle

Lee Zeldin didn’t win, but he sent a message to Gov. Hochul