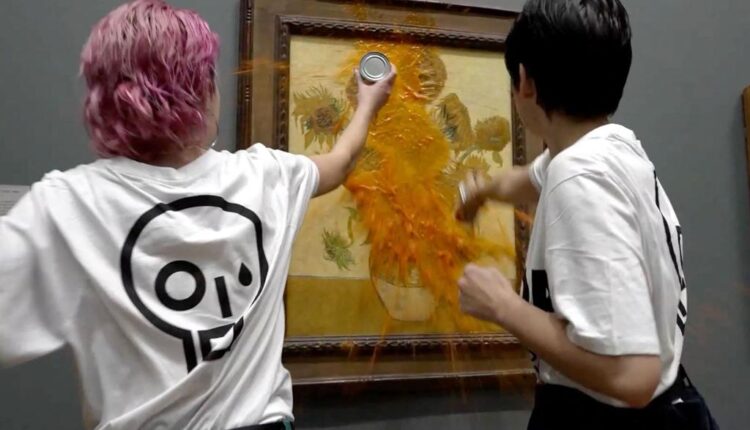 Climate activists have found a new target — the greatest masterpieces in the history of Western art.

Heretofore, no one thought that Claude Monet’s “Haystacks” — a sublime series studying the changes in light and color on haystacks in a field — or Vincent van Gogh’s “Sunflowers” — a painting that is instantly recognizable and forever associated these flowers with the troubled artist — had harmed anyone, let alone had anything to do with the alleged climate emergency.

But that was before activists showed up at museums to splatter these works with tomato soup or mashed potatoes, part of a trend of protests directed at some of the most recognizable works in the Western artistic canon.

The actions are a new low, which is saying something. The level of childishness involved makes Greta Thunberg look prudent and statesmanlike by comparison.

Fortunately, museums have had the forethought to idiot-proof their major works with special protective glass. The activists say they don’t seek to harm the art, although they are not people one would naturally nominate to make fine-grained decisions about the consequences of their stunts involving spray paint, glue and foodstuffs in close proximity to delicate, priceless treasures.

Margaret Klein Salamon, the executive director of the Climate Emergency Fund, told BuzzFeed News that the protests only make sense because the activists are thinking things are “so bad that I’m gonna do this crazy thing and glue myself to a painting or a frame.”

In other words, they are channeling the famous line from Otter in the movie “Animal House” — “this situation absolutely requires a really futile and stupid gesture be done on somebody’s part.”

It’s not the Taliban blowing up the Bamiyan Buddha statues, but the nihilistic spirit is the same.

The protesters have asked, “What is worth more, art or life?” This is a particularly juvenile false choice. Art doesn’t hurt or kill anyone. To the contrary, representational art is part of the warp and woof of humanity — look no further than the 30,000-year-old paintings from the Chauvet Cave in southeastern France — and profoundly enriches life.

The juxtaposition of pieces of art of great subtlety and power, whose value has stood the test of time, with often pale, ill-kempt kids ranting hysterically is comical. The beauty and mystery of Sandro Botticelli’s “Primavera” and the pathos of the statue “Laocoön and His Sons,” both targeted recently, inevitably diminish those using the works as cheap platforms for publicity.

The protesters make strained connections between the art and their causes. A copy of the Leonardo da Vinci painting “The Last Supper” at the Royal Academy in London was targeted, as a news report put it, “because people around the world are experiencing a food crisis.” Evidently, no one told the activists that the point of the last supper is emphatically not the food.

One of the protesters targeting the Monet painting in a museum in Potsdam, Germany, declared, “Science says we won’t be able to feed our families by 2050. This painting will be worth nothing if we have to fight over food.”

By that logic, there is no act of cultural desecration that isn’t justified. Why not sandblast the ceiling of the Sistine Chapel, sledgehammer Michelangelo’s “David” or bulldoze Notre Dame because they’ll all be worthless in the climate dystopia awaiting us?

The activists are quite pleased with the attention they are getting. It’s not true, though, that all publicity is good publicity. What they are really putting on display is their own recklessness and fanaticism.

On their own terms, they should think about how having easy access to the most awe-inspiring works of arts ever fashioned by mankind is the ultimate privilege. There are no world-class art museums in, say, Micronesia.

So maybe some respect and gratitude for the timeless contributions of true geniuses is in order, but that would require some perspective and decency, wouldn’t it?