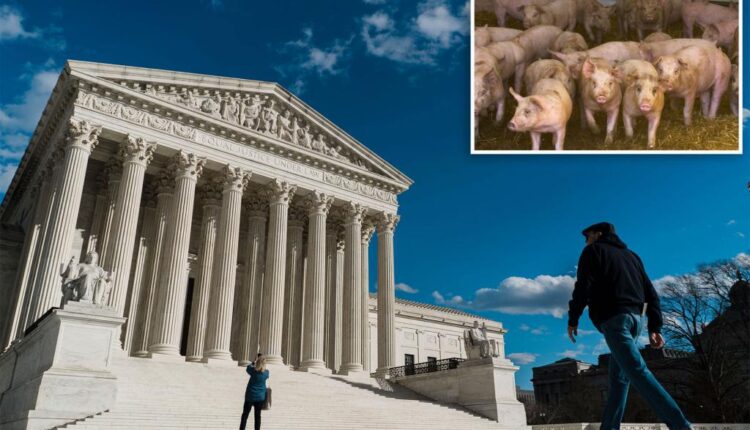 The most consequential case in the US Supreme Court this term isn’t about race, election law or even abortion. It’s about pigs and how much space a sow needs to give birth and wean her piglets.

The justices allocated nearly two hours and 15 minutes for oral arguments last week in a case pitting pork farmers from across the nation against the state of California. That’s more time than the court allocated even for the case overturning Roe v. Wade.

It’s no wonder. At stake is whether California imposes its left-wing agenda on the entire nation.

In 2018, California voters approved Proposition 12, which bans sale in the state of pork traceable to a farm anywhere in the country that fails to provide each birthing sow with 24 square feet of space. It’s hard not to be sympathetic to animals confined to small spaces, but only 4% of pig farms meet California’s new standard.

You can buy ground pork raised that way at Whole Foods for $8 a pound. Call it boutique pork. Most Americans can’t afford it. The California pig law is estimated to raise pork prices by 9.2%, when food is already unaffordable for many.

California consumes more pork than any other state and therefore has market clout. But almost no pork is produced there. Californians are dictating how out-of-state farmers run their businesses.

What’s next? California forcing businesses nationwide to comply with its left-wing climate and labor laws? (It already has a waiver allowing it to set its own auto-emission standards.)

The damage that could be done is so severe that the Biden administration is siding uncharacteristically with the pork farmers against the biggest blue state in the nation.

So is usually left-leaning Justice Elena Kagan. During oral argument, Kagan questioned whether laws like California’s, which could lead to interstate commercial warfare, are welcome: “Do we want to live in a world where we’re constantly at each other’s throats and, you know, Texas is at war with California and California at war with Texas?”

Kagan imagined that some states would pass laws barring products made in open shops, instead of with union labor.

Justice Brett Kavanaugh asked, “So what about a law that says you can’t sell fruit in our state if it’s produced, handled by people who are not in the country legally?” A jab at California.

The US Chamber of Commerce cautions that California will “use its considerable market power to impose its political will on the people of other states” including dictating labor laws, corporate-board-membership laws and progressive “environmental, social and governance” regulations.

Of course, states can pass laws to protect their own residents’ health and safety, such as outlawing marijuana, even if the law incidentally influences commerce in other states.

There’s a test for those laws. In 1970, the Supreme Court ruled in Pike v. Bruce Church that the burden on interstate commerce must not exceed the benefits to residents’ health and safety. The justices discussed Pike. But California concedes it doesn’t have evidence the 24-square-foot rule benefits humans by making pork healthier to eat. It’s for the benefit of the pigs.

Six of the justices — all but Clarence Thomas, Neil Gorsuch and Sonia Sotomayor — looked to a principle that goes back to the nation’s founding, the dormant commerce clause, which limits how states can affect commerce beyond their borders. The Constitution was written largely to halt chaotic commercial infighting among the original 13 states.

In a rare moment, Kagan referred to the founders’ intent and said that “the balkanization that the framers were concerned about is surely present today.”

Don’t count on the court to go along with California’s hostile takeover. Not until pigs fly.