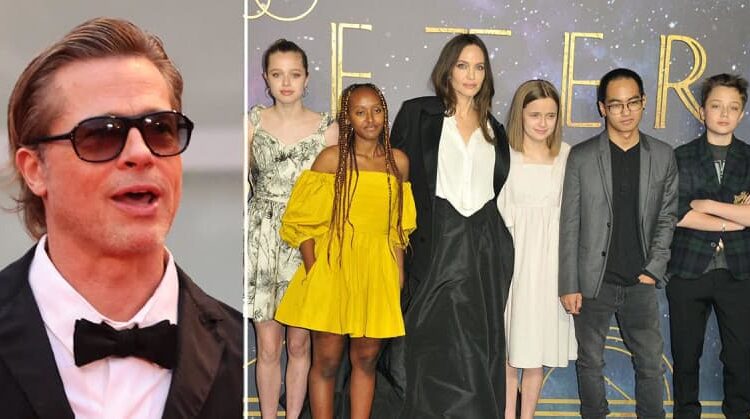 The fight that broke up Brad Pitt‘s marriage to Angelina Jolie stemmed way beyond the former couple. New details about the 2016 altercation have come to light, revealing the accusations as to why the actor had been investigated by the FBI for child abuse — and the information is shocking.

Pitt, 58, allegedly “choked” one of their children during the fight and “struck” another when they stepped in to protect their mom in the now-infamous private plane fight, RadarOnline.comhas learned.

A countersuit was filed on Tuesday, revealing the accusations against the father of six.

According to the documents obtained by Page Six, the Once Upon A Time… In Hollywood actor “choked one of the children and struck another in the face” during the altercation. The filing also claimed that Pitt “grabbed Jolie by the head and shook her.”

RadarOnline.com already reported that the alleged intoxicated actor was accused of pouring beer on Jolie, but we’ve now learned he also allegedly threw liquid on their children.

“At one point, hepoured beer on Jolie; at another, he poured beer and red wine on the children,” the countersuit read.

The documents stated that Jolie, 47, jumped into action and “grabbed” Pitt to get him away from their children, but she was allegedly injured in the process. “To get Jolie off his back, Pitt threw himself backwards into the airplane’s seats injuring Jolie’s back and elbow,” the filing continued.

Earlier this year, Jolie was identified as the “Jane Doe” who filed a lawsuit against the FBI, in which she questioned why the investigation into her ex over assault allegations was closed and produced no charges for the actor.

The special agent’s notes revealed bombshell accusations that the public had never heard before. RadarOnline.com also published the black-and-white photos from the FBI documents showing Jolie’s injuries after the heated fight.

After an investigation, the FBI closed the case against Pitt. The Los Angeles County Department of Children and Family Services also investigated him for child abuse after Jolie claimed an incident erupted between Maddox and the movie star on the plane during their fight.

Pitt was cleared of any wrongdoing.