Bore! Donald Trump has gone and lost his swing 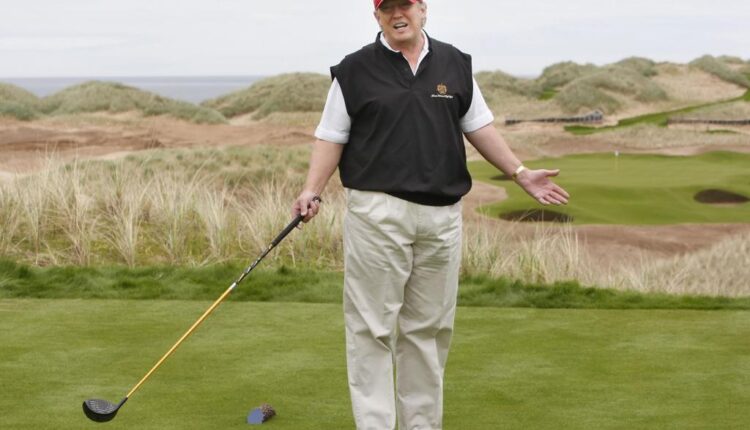 For Donald Trump, politics and entertainment are intertwined and often synonymous. His remarkable success at both makes his latest missteps especially puzzling because Trump is committing the cardinal sin of both: He’s become boring.

The ultimate shock jock is now predictable. Wind him up and watch him throw a garbage can full of insults at anyone who won’t kiss the ring. Ho-hum.

Florida Gov. Ron DeSantis and Virginia Gov. Glenn Youngkin are getting the Trump treatment now. Both are rising Republican stars, so naturally the former president trashes and demeans them. Can’t be competition for top dog.

Long gone is the time when Trump brought fresh blood to the old and tired Republican Party. “Low energy Jeb” brilliantly ended the career of a nominee-in-waiting, and his demolition of Hillary Clinton saved America from a disaster.

Trump’s was a consequential presidency that was far better for America and its global allies than anything produced by his predecessor or his successor. His Operation Warp Speed delivered a COVID-19 vaccine in record time, America was more prosperous and the world was safer and more stable with him in the Oval Office.

Trump achieved those gains despite a corrupt FBI, a conspiratorial Deep State, a rabid media and impeachment-obsessed Dems. He deserved a second term and, had he let his America First policies do the talking, would have had one.

Even after his reckless efforts to overturn the 2020 election and the Jan. 6 Capitol riot, enough goodwill remained that victory in a 2024 primary and the general election remained possible. But Trump’s conduct in his post-presidency has been so erratic that a declining slice of voters hungers for his return.

For example, his insistence on keeping government documents, some of them supposedly secret, despite his own lawyers’ warning, was a gift to the Biden administration, and might end up in criminal charges. And that’s just one area where he fails to recognize that his petty feuds and puerile brawling have worn out their welcome among many people who wish him to grow from the past, not repeat its mistakes.

Sadly, there’s no sign he has the capacity or desire to change, which explains why his diminished inner circle can be charitably called the C-Team. His habit of listening only to those who tell him what he wants to hear, which led to endless staff churning in the White House, drives away those willing to disagree with him.

A good manager of a candy store knows that disagreement can be healthy and valuable. Why doesn’t Trump know it?

Most important, his relentless claim that the 2020 election was stolen has become an insurmountable barrier to many voters and will ultimately throttle his comeback effort. He told me last March that agreeing with him on the claim was not a litmus test for supporters or his endorsement, but time has proven that to be false.

As the midterms demonstrated, the stolen claim has become a dividing line for a public that, polls showed, craves a return to a more normal era. His fixation on what happened two years ago led Trump to endorse unelectable duds in some races, and the issue became a burden for some of his better candidates in swing states.

That was inevitable because there is no substantive political or practical response to Biden’s victory at this point. Although ballot handling did raise suspicions in key states where Dems managed to lower security guardrails, the president and his team never produced evidence that it was big enough to swing the outcome.

The result is that a focus now on the 2020 election is a dead end that likely will cost the GOP control of the Senate again, just as Trump did by botching turnout for the two Georgia run-offs in January of 2021.

His shameful attacks on DeSantis are especially disturbing. Trump knew a big victory would turn the governor into a national star and a likely competitor in 2024, so he fired up the mud machine.

Three days before the election, Trump slimed him as “Ron DeSanctimonious.” He did it at a televised rally and it’s hard to see the timing as anything other than an attempt to soften DeSantis’ support.

It was like 2016 all over again, only now it made no sense and felt indefensibly greedy.

In fact, it’s not a stretch to suspect Trump would have been pleased had DeSantis lost and Dems took over Florida. That would show ‘’em who’s king.

Unfortunately for Trump, DeSantis did more than just win. He blew away Democrat Charlie Crist by nearly 20 points and won both the Latino and women’s’ vote.

He topped it off with a sensational victory speech that touched all the right buttons, from politics to cultural. Part Churchill, part biblical, the moment was rip-roaring proof it is possible to have the best of Trumpism without the burden of Trump.

The former president reacted with King Lear-level madness, aiming more venom at DeSantis and Youngkin, whose name, he said, “Sounds Chinese, doesn’t it?” He claimed neither man would have won without him.

There is some truth to the claim in that Trump’s 2016 race and his presidential policies revealed an electorate that most Republicans had either shunned or never seen. But that’s ancient history in political years and because Trump is 76 now and able to serve only one more term as president, the proper role for him is to be party kingmaker and help pick his successor.

But that’s obviously not the role he wants and so is hell-bent on killing off anyone who threatens his plan to reclaim the White House.

At his announcement this week, he’ll almost certainly declare he’s making a third run. Even anticipating it creates a feeling of
déjà vu.

There is little mystery about what he will say regarding Biden and possible GOP challengers. The here-we-go-again experience also will feature attacks on Senate GOP leader Mitch McConnell, and it wouldn’t surprise if Trump again slurs McConnell’s wife, Elaine Chao, because of her Chinese background.

No doubt his performance will play well among his core supporters, which are probably about 35-to 40 percent % of registered Republicans. That still makes him the top draw in the party, and may lead DeSantis and others to skip the race knowing that a bruising battle with him would split the party and hand victory to the Dem nominee.

At the same time, it’s very hard to see how Trump could ever win the White House again, so the result is foretold: A Trump nomination would make him a two-time loser and mean four more years of a Democrat in the Oval Office.