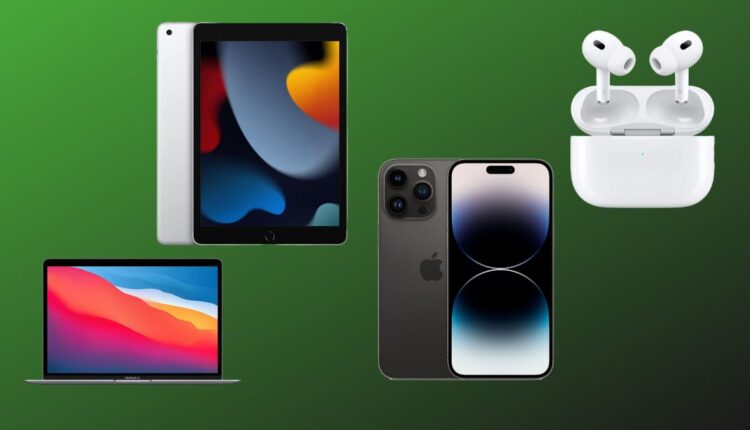 The big day is only tomorrow – but the Black Friday Apple deals are already in full swing. Retailers everywhere are dropping prices on the hottest Apple kit as the deals train gets a’ rolling.

We’ve already had some great Apple deals over the last year, with some of the best prices yet on everything from iPhones to iPads and MacBooks, and everything in between. Black Friday is already upping the ante this year, with massive savings on Apple products.

There aren’t going to be any deals direct from Apple, which prefers to simply hand out gift cards of varying value with a purchase from the Apple Store. Everywhere else Apple products are fair game for big discounts, with loads of opportunities to nab some great deals. We’ve found all the best price and put them here for you to check out – and help you get the best deal possible this Black Friday.

You don’t tend to see many deals on iPhone throughout the year, with most carries preferring to wait for Black Friday before they pull out the big guns. There are sure to be Black Friday Apple deals on both contract and SIM-free iPhones, so no matter what you’re looking for you’ll be able to save some money. This year, we’re looking forward to some of the best Black Friday iPhone deals.

We’ve already had loads of great deals on the iPad lineup this year, so we’re looking forward to seeing what Black Friday has in store for us. There’s an iPad for every need and budget, so we’re hoping for some great Black Friday iPad deals.

If you’re looking to get yourself a new MacBook, then you needn’t look further than Black Friday. The latest Black Friday Macbook deals have already started to roll in, with some huge savings on some very premium laptops.

There are always loads of great AirPods deals to be found, so we reckon that Black Friday is going to have some of the best. Apple’s headphone line is always a popular option over the holiday season, so it’s worth grabbing a discount early before the rest of the world cottons on to those low prices. These are the best Black Friday AirPods deals that we’ve spotted.

The Apple TV is a very expensive streaming box – but you get what you pay for. Over Black Friday, we reckon there are going to be some big deals on the Apple TV, both the previous model and the new version – so make sure you keep an eye on the Black Friday Apple deals.

Smart home aficionados who are well-versed in HomeKit will know that Apple-compatible accessories are often a bit more expensive than the competition. That’s why it makes sense to snag a HomePod deal when you can and also makes it worth keeping an eye on the prices of HomeKit cameras and other HomeKit accessories during Black Friday.

Black Friday officially takes place on November 25 this year, though the sales start before that date and run for a few days after too. For Apple, it tends to keep its Black Friday sale to a minimum, and we’re still not sure what that will look like this year.

That being said since Black Friday takes over most of November, and we’ve already seen a ton of direct price drops on Apple gear at third-party retailers like Amazon and Best Buy, among others, there will be plenty of opportunity to save some money.

Where can I find the best Black Friday Apple deals?

Apple itself tends not to reduce any of its products, instead opting to give gift cards when you buy something. Until this is confirmed, however, we can’t say for sure whether it’ll do the same this year, but we’ll keep you updated.

Meanwhile, other retailers are well known for posting some of the best prices around over Black Friday: here’s just a taster.

How long will the Apple Black Friday deals last?

The simple answer is Black Friday itself – they become Cyber Monday deals after that. After that, some of the deals stick around for the Christmas period – although most of the good ones leave fairly quickly. Either way, it’s a good bet to grab a deal as soon as you see it.

Will there be other tech reduced over Black Friday?

Short answer: yes. Long answer: yeeeesss. There are Black Friday deals on all kinds of tech products from laptops to hair straighteners. We’ll be covering all the best Apple-related deals, so if there’s anything you’re looking for then stick with us to find all the best prices.

Apple and Epic have signed a deal, but it isn’t the one you want