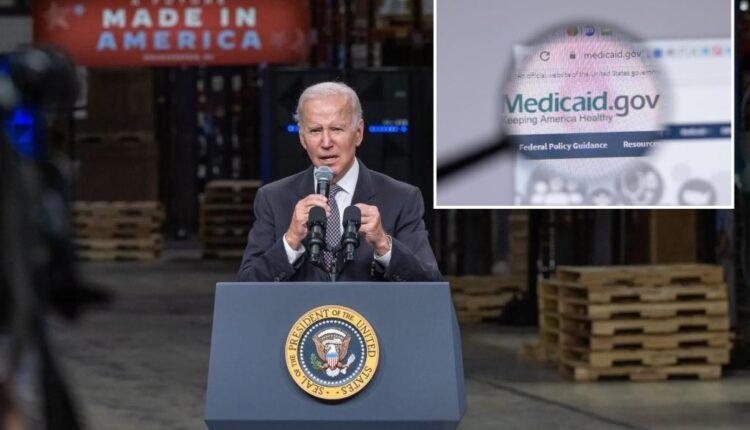 Medicaid is on the verge of becoming the most broken welfare program in American history. President Joe Biden is moving forward with three dangerous policies that will further undermine its already-shaky integrity and even expand it into housing, food and climate change. State leaders and Congress must fight to restore Medicaid to its mission of protecting the health and well-being of the truly needy.

The most immediate threat comes from Biden’s three-month extension of the COVID public-health emergency, which was set to expire Oct. 13. So long as the emergency is in effect, states receive added Medicaid funding on the condition they don’t cut ineligible recipients from the rolls.

As I show in a new paper, Medicaid could swell to 100 million enrollees by January, or nearly a third of America’s population. Yet at least 21 million are ineligible, and that number will only rise. Taxpayers are spending $16 billion per month on ineligible recipients, a high cost that grows higher by the day.

The emergency is set to expire in January, but it’s possible if not probable Biden will extend it again to keep as many people on Medicaid as possible. (He’s already extended it several times, despite stating early this year that normal life could resume and saying last month, “The pandemic is over.”)

Even if he lets the emergency end, his administration wants states to take well over a year to remove ineligible enrollees. In all likelihood, the president will keep finding ways to keep people on Medicaid who shouldn’t be.

Which leads to the second policy Biden is pushing. In August, his administration proposed a rule that in the name of improving “retention” would make it much harder to identify ineligible enrollees. The Centers for Medicare and Medicaid Services wants to ban states from conducting in-person interviews to determine program eligibility. States rely on these interviews precisely because they make it easier to identify waste and fraud. The Biden administration also wants to limit the information states can request from Medicaid recipients, making it more difficult to discover if they’re ineligible while reducing the frequency of eligibility reviews.

What’s more, Team Biden is trying to force states to help ineligible enrollees find different coverage before removing them from Medicaid. That will add such an intense administrative burden to cash-strapped state governments that they’ll likely avoid the hassle of removing ineligible people altogether. (Hilariously, the rule claims to help reduce “administrative burden.”) If this rule moves forward, the Biden administration will end any serious attempt at program integrity, even though Medicaid is already rife with abuse and on the fast track to insolvency.

Finally, the Biden administration is pushing Medicaid far beyond its purpose. Last month, the Centers for Medicare and Medicaid Services approved unprecedented waivers for Massachusetts and Oregon. Both states can now use scarce Medicaid dollars to pay for enrollees’ food and housing, on the grounds that such issues influence health outcomes. That’s not what Congress created Medicaid to cover.

The situation is laughably bad in Oregon. The federal government is letting the state spend Medicaid money on things like air conditioners and air filters. Why? Because those items help residents deal with climate change, and climate change purportedly affects individual health.

These waivers are all the more extraordinary since the Biden administration refuses to grant state waivers that get Medicaid recipients into work and eventually off the program. This White House would rather use Medicaid to address “extreme weather” than promote employment, which has proven health benefits, from mental health to lower mortality.

None of Biden’s Medicaid policies should be allowed to stand. Medicaid already dominates state budgets, with nearly $1 out of $3 spent going to the program. To remove ineligible enrollees and protect taxpayers, governors should immediately opt out of the extra funding provided under the public-health emergency. Doing so will allow states to begin cleaning up their Medicaid rolls instead of waiting, potentially indefinitely, for the federal government to untie their hands.

Meanwhile, Republicans and sane Democrats in Congress should push for policies that prevent the Biden administration from gutting state eligibility reviews. They should also seek to restrict state Medicaid waivers to direct health issues. Such measures should make their way into must-pass laws, thereby overcoming the threat of a Biden veto.

The alternative is to let Medicaid break to the point of irreparability. It’s already too close.

Sam Adolphsen, a former chief operating officer at the Maine Department of Health and Human Services, is policy director at the Foundation for Government Accountability.