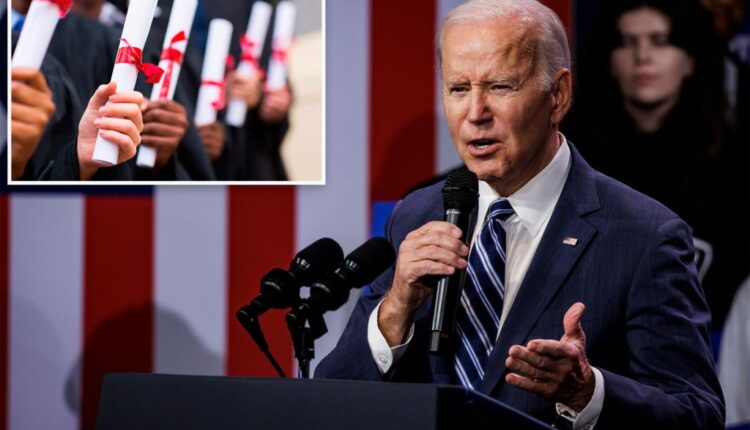 The much-anticipated “red wave” in Tuesday’s midterms ended up barely a red trickle, with the GOP set to win a narrow House majority and control of the Senate likely coming down to a runoff in Georgia. The White House is reportedly “giddy” and “gleeful” to have avoided electoral disaster despite high inflation, widespread concern about crime and the natural tendency for midterm elections to favor the party out of power.

Republicans are not so giddy, to say the least. When analyzing what went wrong, the GOP shouldn’t overlook how President Joe Biden blatantly bribed some young voters to save him from the red wave — and they don’t even need the cash.

That’s right: The kids actually did show up to vote this time around. Per the Edison Research National Election Pool’s exit polling, 27% of eligible voters aged 18 to 29 cast ballots. That makes this the second-highest youth turnout in a midterm in nearly 30 years. And Edison estimates that in key competitive states, the youth turnout was even higher, around 31%.

Predictably, Democrats swept this voting block by a huge margin. But the gap was even bigger than most expected. Per the same exit polls, 63% of young voters voted for Democrats, a clear majority, whereas all other age groups were closely divided. And in the closest races that ultimately may make the difference, young voters swung even more heavily in favor of the Democrats.

In Pennsylvania, for example, John Fetterman won 70% of the youth vote compared with Dr. Mehmet Oz’s 28%. In Arizona, Mark Kelly claimed 76% of this demographic while his Trump-backed challenger, Blake Masters, got just 20%.

In such a close election, the youth vote may well have made all the difference. “If not for voters under 30,” as Harvard pollster John Della Volpe remarked on election night, “tonight would have been a Red Wave.”

So why did young voters show up in droves and skew so far to the left this time around?

Abortion ballot measures and Roe v. Wade’s overturn may prove to be the biggest single factor. But we can’t ignore the fact Biden, through his unilateral student-debt forgiveness initiative, attempted to funnel billions of dollars directly into the pockets of young people just a few months before the election.

That timing was not coincidental — and certainly seems to have bought his party some of their votes.

The president admitted as much in his reaction to Tuesday’s results: “I especially want to thank the young people of this nation, who I’m told — I haven’t seen the numbers — voted in historic numbers again” to “continue addressing the climate crisis, gun violence, their personal rights and freedoms and the student-debt relief.”

A massive 45% listed inflation as their priority. This ties into student-debt relief because, according to Intelligent.com’s recent polling, many beneficiaries of the Biden bailout plan to use the extra money in their monthly budget to pay their other bills.

More than half plan to buy new clothes with the Biden bucks, while a whopping 46% of prospective beneficiaries say they’ll use the extra cash to dine out or go on vacation. With surprising candor, 28% even admitted they’ll use it to buy drugs or alcohol!

Clearly, these struggling young Americans were sorely and desperately in need of taxpayer-funded relief.

Just kidding. In fact, only 28% of respondents said their student loans were very negatively impacting their lives. On the other hand, 40% said they weren’t struggling with their student loans at all — but they’ll still take the “free” money, of course.

So why wouldn’t they reward ol’ Uncle Joe with a vote after he helped them cover their next batch of edibles and their spring break trip?

Biden’s student-debt “cancellation” surely had a significant effect on boosting the youth turnout. This might be smart politics, but it has jaw-dropping ramifications. After all, even Democrats like Nancy Pelosi had admitted that the president didn’t have the constitutional authority to enact his bailout unilaterally without Congress. This means that when Biden did it anyway, he did so knowing it’s almost certainly unconstitutional but that the courts wouldn’t have worked through it by Election Day.

Yup: Biden knowingly ignored his constitutional limitations to give young voters a bailout they didn’t even need (and likely won’t get) to grease the wheels a few months before an election that looked bleak for his party.

This may have just saved Democrats from a red wave — but it should go down in history as a deeply cynical political ploy and a national disgrace.

Brad Polumbo is a journalist, YouTuber, TikToker and co-founder of BASEDPolitics.