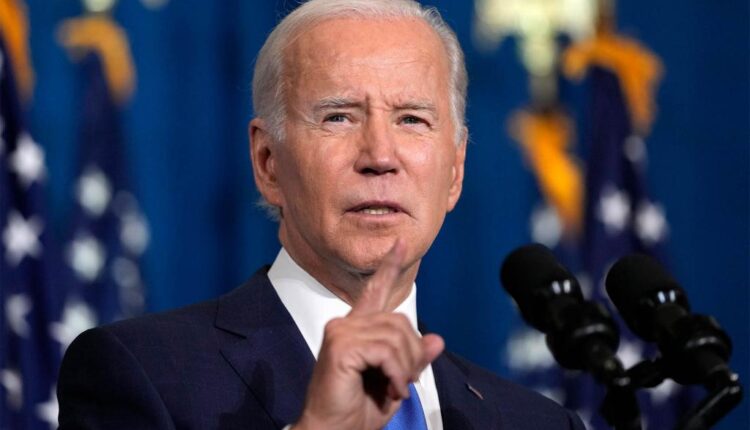 In a lethargic yet indignant speech Wednesday from Washington’s Union Station, President Biden portrayed Republican voters as a deadly threat to the survival of democracy. But Joe Biden’s version of democracy contains a Montana-sized asterisk that magically exempts himself from his oath of office to uphold the Constitution.

Biden endlessly castigates former President Donald Trump for the “Big Lie” that Trump won the 2020 election. But Biden’s “Big Lie” is that he is entitled to use federal power however he pleases because he was certified the winner of that election. But 81 million votes didn’t nullify the Bill of Rights.

Speaking on the edge of Capitol Hill, Biden portrayed himself as the savior of the republic. He declared, “Autocracy is the opposite of democracy. It means the rule of one, one person, one interest, one ideology, one party.”

Like Biden’s mandate for 80 million Americans to get COVID vaccines — a dictate the Supreme Court struck down as illegal? Like when Biden contorted federal law to cancel $500 billion in student loans to give Democratic candidates a boost in next week’s election? Like when Team Biden sends FBI agents to harass parents who complained at school-board meetings? Like the Biden administration’s proposal to cancel all federal school breakfast and lunch subsidies for any state that does not impose radical pro-transgender policies on every public school?

Biden warned of “the consequence of lies told for power and profit, lies of conspiracy and malice, lies repeated over and over to generate a cycle of anger, hate, vitriol and even violence.”

Like the hatred Biden spurred towards people who did not get COVID vaccines? In his September 2021 televised speech, Biden portrayed the unvaxxed as Public Enemy No. 1, warning that “your refusal has cost all of us.” Biden sneered that vaccine skeptics only wanted “the freedom to kill you” with their COVID. He kept railing about a “pandemic of the unvaccinated” long after COVID cases snowballed among the fully vaxxed. He continues to falsely claim that the vaccines prevent transmission.

Biden offers a “Trust Me” version of democracy in which the Supreme Leader is entitled to be revered. That’s why his appointees are shrouding his abuses and failures. The Department of Homeland Security wants social-media companies to censor criticisms of Biden’s botched withdrawal from Afghanistan. Biden’s Treasury Department and Agency for International Development are violating federal law by refusing to provide any information on US spending and policies to the special inspector general for Afghanistan reconstruction. Even the Trump administration was not that secretive.

Biden touted “the rule of law” Wednesday night. But instead of that ideal, Biden offers a “paying-and-obeying” version of democracy in which citizens have no right to complain about the feds wrecking prosperity. Are you outraged about the dollar losing 13% of its value since Biden took office? You’re an enemy of democracy. Are you peeved that stock markets lost $10+ trillion this year thanks in part to Biden’s policies? You’re an enemy of democracy. Are you miffed at Biden-era high gas prices? Shut up, peasant, or we’ll cancel the driving rights of all non-Tesla owners.

Biden repeatedly invoked the specter of “political violence” to demonize all his opponents. But what about post-election violence spurred by oppressive policies imposed by winning politicians? Biden said last night that Americans settle differences “at the battle box” (he meant “ballot box”). Biden promises that if two more Democratic senators are elected, he will ban all “assault weapons.” How will Team Biden confiscate tens of millions of semi-automatic rifles? As long as Biden can claim that election victories consecrated his policies, any quibbles about the Second Amendment will be null and void.

Biden sought to paint all Republican candidates as illegitimate because of the rhetoric of some GOP candidates. Apparently, there is collective guilt for only one political party in next week’s election. But this is consistent with Biden claiming a prerogative to define the issues and non-issues for the election scorecard. According to Biden, “democracy dies” if citizens do not vote as their commander-in-chief tells them.

Biden is correct that “democracy is under threat.” But the greatest danger is elected politicians — in the White House and on Capitol Hill — who believe that vote totals entitle them to force Americans to live as they command. Let’s hope Biden’s abuses are awakening millions of Americans to the perils of dictatorial power regardless of which party controls the White House.

From Senegal to NYC: the latest sign of Biden’s open-borders insanity