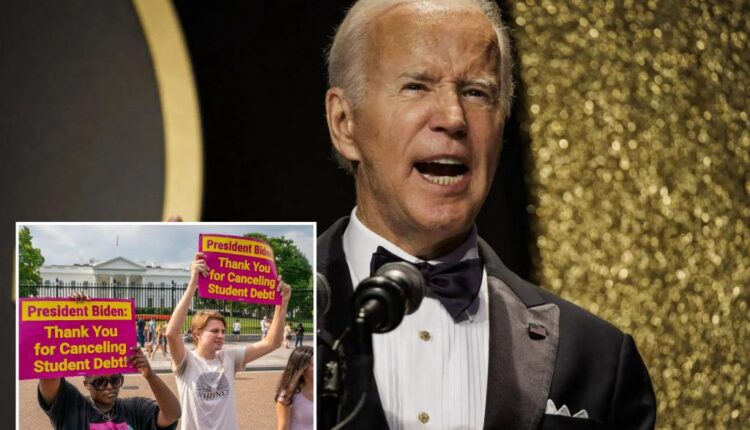 Why the change? At least partly because the Bidenites fear legal action, and excluding these borrowers might make it harder for anyone to successfully sue to stop it. But that’s practically an admission the whole program is legally dubious.

Indeed, just a year ago the Education Department admitted it lacked “the statutory authority” to forgive student loans en masse. Yet then Team Biden, under pressure from progressives and hoping to boost Dems’ hopes in the midterms, suddenly announced a huge forgiveness program, claiming it had the authority after all, under the post-9/11 HEROES Act.

That’s nonsense, of course, especially since the “national emergency” Biden & Co. cite to invoke the act is the pandemic, which the prez has (rightly) declared over.

In reality, Biden’s rollout of his forgiveness program, and his touting of it since, is one big charade. As Mark Joseph Stern noted at Slate in a piece rooting for the giveaway, the program only “exists primarily as a series of press releases, fact sheets and FAQs put out by the White House and the Department of Education.” That is, it’s still barely a proposal.

Of course, if the White House does pull it off, it would be terribly unfair to those who don’t have outstanding loans, not to mention ill-timed: With a price tag north of $400 billion, it’ll fuel inflation even further, especially on the heels of the Dems’ $250 billion CHIPS and Science Act, $485 billion Inflation Reduction Act, $1.2 trillion infrastructure bill and $1.9 trillion American Rescue Plan.

Biden’s answer? Simply asserting “we can afford” this giveaway because the feds already gave away so much in pandemic relief, so shut up.

The point isn’t just that you’d better not count on a dime in loan relief. It’s that you can’t trust anything Team Biden says it’ll do — or has done.

It claims it’s got the border secured, even as it literally waves in illegal migrants. It boasts how the Inflation Reduction Act will slow price hikes, when every independent analyst says it won’t. It pretends it’s fixing supply chains, lowering gas prices, cutting the deficit — all of it empty noise.

Why lie so repeatedly and brazenly? Because the Bidenites either won’t or can’t deliver on any of these fronts, but hope that denial and false promises can fool enough people to let them muddle through until things improve on their own — or they can pin the blame on Republicans, corporate America, the courts, whoever.

Heck, the White House keeps trying to blame the GOP for rising crime.

The grim bottom line: Nothing they say reflects reality. Then again, when they do act — as in, say, Afghanistan — they botch things royally.

Empty lies might be the best America can hope for from Team Biden.