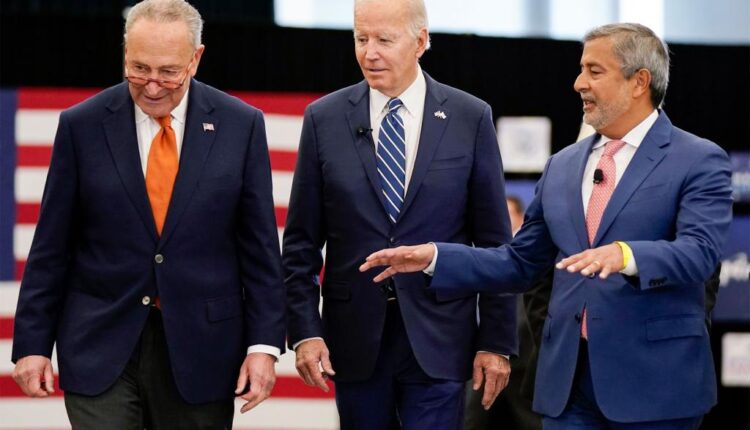 President Biden and Gov. Hochul strutted Thursday at a celebration for a future Micron semiconductor plant outside of Syracuse. The groundbreaking for the factory won’t happen until 2024, but Democrats needed something, anything, to pretend they care about the economy before the midterm elections.

Biden, sporadically shouting during his spiel, also made a barrage of claims about reducing the deficits that were so ludicrous that even the Washington Post condemned his deceit. Biden also mumbled angrily about Republicans cutting Social Security, which they haven’t done.

Biden and Hochul are exploiting recently passed legislation to parade as economic saviors. Congress passed the Chip Act in August, divvying up $52 billion in subsidies for semiconductor production, along with a vast array of other federal spending. That law made Biden the nation’s Semiconductor Czar, and he promised that he would “personally have to sign off on the biggest grants” to companies. (Same dude says economy is now “strong as hell”.)

But even liberal Bloomberg News warns that the Chip Act “could become a $280 billion boondoggle” with “bloated, wasteful, government-dependent chipmakers demanding yet more handouts a decade down the line.”

Hochul swayed the New York legislature to enact a similar subsidy of up to $10 billion for semiconductor producers. Micron is expected to pocket more than $5 billion — the largest corporate handout in state history. Federal subsidies will be added next year when the Chip Act starts dishing out goodies. The total subsidy per promised job exceeds $600,000 and could rise far higher.

The Micron story is a distraction from the economic devastation that Biden and Hochul have spawned. Soaring inflation, spiking interest rates, and higher corporate taxes are inflicting widespread harm. NASDAQ has fallen by almost one third this year, wiping out trillions of dollars of market value of the nation’s most innovative companies. New York State has the second-worst business tax climate in the nation. The Empire Center for Public Policy reported that “the state’s notoriously high barriers to business entry will be lowered for Micron.”

Biden boasted that Micron’s investment in New York is “the largest investment of its kind . . . ever ever in history.” Because the plant will run solely on renewable energy, its production costs could be sharply higher than unsubsidized factories elsewhere in the world. Biden stressed that Micron would be spending $100 billion. Actually, the company has said it would invest “up to” $100 billion over 20 years. Biden boasted, “With Micron’s $100 billion investment alone, we’re going to increase America’s share of global memory chips and production by 500%.” Regrettably, Biden did not reveal the magic wand he will use to make that a reality.

Hochul claims her handouts to Micron will generate more than 50,000 jobs in New York. But the governor’s office has refused to disclose the private study from which that estimate was concocted.

Politicians’ boasts about the job benefits of corporate subsidies are not covered by the Securities and Exchange Commission’s rules on fraudulent statements. A study released last week by Reinvent Albany noted, “New York State spends roughly $5 billion every year subsidizing big businesses. . . . There is overwhelming evidence that government subsidies to businesses are a very poor way to create good jobs and local economic growth.”

The study noted that “the state’s oversight of the Excelsior jobs program — under which Micron will receive the tax breaks — is notoriously poor.”

A decade ago, President Barack Obama visited the state and proclaimed, “Right now, some of the most advanced manufacturing work in America is being done right here in upstate New York. Cutting-edge businesses from all over the world are deciding to build here and hire here.” Gov. Andrew Cuomo appointed Alain Kaloyeros “to build a semiconductor corridor across upstate,” Politico noted. The program collapsed after Kaloyeros and three other officials were convicted for bid-rigging in 2018 and sent to federal prison.

Micron and other chip makers who pocket government subsidies could find themselves junior partners to political hacks and unions, who have more influence in Washington than private companies these days. Commerce Secretary Gina Raimondo boasted that “there’s a lot of strings attached” in the Chip Act. Maybe future Green legislators will require Micron to rely solely on windmills to make chips.

Biden and Hochul’s subsidy theater is no substitute for reviving prosperity across the board. Politicians don’t learn from mistakes committed with other people’s money. And a president who has no idea about the price of gasoline should be kept far away from control of semiconductors.