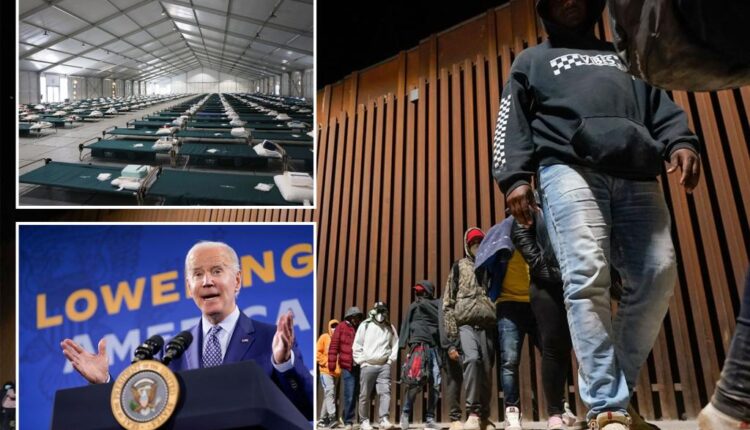 More than 100 migrants originally from Senegal — a West African republic smaller than South Dakota — have moved into a tent city on Randall’s Island that had been erected in response to a surge of asylum-seekers whom the Department of Homeland Security had released at the US-Mexico line. They’re evidence of how effectively President Biden’s policies have broken the southwest border.

I say, “originally from Senegal” because according to an imam who organized their arrival, they’d been “working in Brazil when ‘they heard the border was open and they left their jobs … and came to America.’ ”

That border wasn’t “broken” or “open” when Biden took office. Instead, the president inherited what his first Border Patrol chief, Rodney Scott, described in a September 2021 letter to Congress as “arguably the most effective border security” in US history.

It didn’t take long for Biden to begin breaking the border by rolling back Trump policies that had allowed DHS to establish operational control there, most notably the Migrant Protection Protocols — better known as “Remain in Mexico.”

Under MPP, Border Patrol agents could send non-Mexican migrants who had entered illegally back across the border to await hearings on their asylum claims. DHS described the program in an October 2019 assessment as “an indispensable tool in addressing the ongoing crisis at the southern border and restoring integrity to the immigration system.”

Indispensable or not, President Biden almost immediately moved to suspend and then terminate the program (twice). In fact, the administration has been fighting an effort by state plaintiffs to force DHS to reimplement MPP in federal court since April 2021.

Note that the month before taking office, Biden promised that he would only roll back those Trump policies after establishing “guardrails” to avoid winding up with “2 million people on our border.”

Not only did Biden fail to erect such guardrails, he didn’t even build speed bumps. That’s why CBP encountered almost 2.4 million migrants at the border in fiscal year 2022.

By my estimates, Biden has released about 1.4 million of them into the United State, not counting nearly a million others who evaded capture and entered illegally.

Although the administration talks about the “broken immigration system” it inherited from former President Donald Trump, it was Biden who “broke” the border, and would-be migrants worldwide, like those from Senegal, know that and are exploiting it.

In fiscal year 2020, before Biden took office, more than 89% of illegal entrants apprehended by agents at the southwest border were either from Mexico or the Northern Triangle countries of El Salvador, Guatemala and Honduras.

In September, nearly 58% of border apprehensions involved people from somewhere else — almost 120,000 individuals in one month. A court filing reveals those migrants came from places as diverse as Nepal, Bolivia and Kyrgyzstan. And 180 from Senegal.

The Senegalese migrants in The Post article who had been resettled in Brazil likely aren’t fleeing persecution and almost definitely don’t qualify for asylum. For what it’s worth, most illegal entrants aren’t asylum-eligible, either.

According to the Department of Justice, in a 12-year period ending in late fiscal 2019, fewer than 17% of migrants entering through the southern border who were cleared to apply for asylum were ultimately granted that protection. By contrast, 32.5% of them were ordered removed when they failed to appear in court. Thanks to “sanctuary city” policies, many will dodge deportation.

It’s unlikely White House officials will admit they’ve broken the border. They claim it’s “secure.” Things are so bad, however, Americans can’t wait for a new administration, so it’ll be up to the next Congress to fix the border and halt the surge.

CNN reports “immigration” is the second-leading issue driving Republicans to the midterm polls, behind “the economy and inflation.” If the GOP wins Tuesday, party leaders will have their work cut out for them — and voters will be expecting results.

From Senegal to NYC: the latest sign of Biden’s open-borders insanity