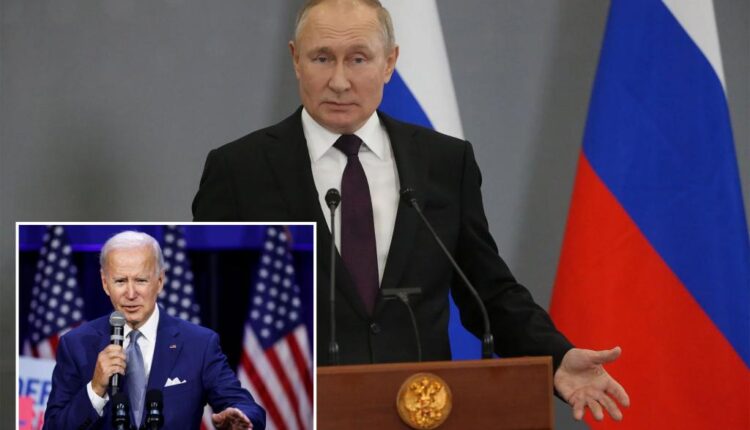 As the weather turns cold, energy prices rise, German factories grind to a halt and the Eiffel Tower’s lights go out, Vladimir Putin is ensuring there will be no respite for the Europeans. After spending much of the summer fiddling with the gas taps to Europe, the Russian president and his fellow energy producers in OPEC+ announced this month they’ll remove 2 million barrels of oil a day from global markets. Saudi Aramco has reassured its customers not to worry: Oil supplies will remain steady — for Asia.

Putin may see himself as a successor to Peter the Great, but his Ukraine strategy has a less-distinguished pedigree. His plan to starve Europe of fuel and force it out of the war is similar to Jefferson Davis’ attempt to use King Cotton as international leverage in the Civil War. The Europeans are bracing for the challenge, but the Kremlin hopes Munich is weaker than Manchester was.

The Russian Federation and the Confederacy found themselves in desultory wars for similar reasons. The antebellum South was able to exploit its strengths in Washington to impose its will on New England and the Midwest with the Fugitive Slave Act and the Compromise of 1850, but the direction of US politics made Southerners as alarmed as Putin became about Ukraine’s trajectory out of Russia’s orbit.

Richmond and Moscow both hoped for a quick victory, but after failing to take the enemy’s capital each found itself facing a long war against an increasingly well-supplied opponent. Russia is stronger than Ukraine, and the Confederacy was weaker than the Union, but both aggressors realized the greatest danger was in the international arena.

Having failed to quickly capture Washington, the Confederates decided they’d use their economic clout to force the Europeans onto their side. More than 80% of the cotton that fed Britain’s textile industry came from the United States in 1860; the Confederates embargoed these exports.

The 2.6 million bales of cotton that arrived in 1860 dwindled to about 70,000 by 1862, and British cotton mills ground to a halt. At the height of the “Cotton Famine,” a quarter of Lancashire’s population needed public assistance, and desperate laid-off workers rioted across northern England. Still, Britain refused to diplomatically recognize the Confederacy or pressure America to end its wartime blockade of the South.

Putin’s first offensive toward Kyiv was a humiliating failure, the Ukrainians are liberating the areas conquered in his second offensive and he appears to hope Europe’s support for Ukraine will not last the winter. So far, Europe is holding firm, and demands for Ukraine to accept Russia’s diktats have yet to materialize. Even the new populist government in Italy is led by Giorgia Meloni, who has promised “her full support” for Ukraine and endorsed previous rounds of arms transfers.

But Berlin’s decision to subsidize 200 billion euros (about the same in dollars) of German energy consumption while blocking a European-wide price cap is drawing howls of outrage across the continent, particularly from people who note that Germany’s unwise decision to tie Europe’s energy markets tightly to Russian supplies created this vulnerability in the first place. Putin is gambling that as winter comes and the pain increases, the pressure will cause some of the Europeans to crack.

Since Putin is cribbing pages from Davis’ playbook, Biden should help the Europeans borrow from Britain’s. Faced with a near-total cutoff from its largest supplier, Britain scrambled for new sources of cotton, importing from countries as far afield as Egypt, India and China. Europe’s leaders have trooped across the Middle East scrounging for new sources of fuel, but the OPEC+ decision shows there are limits to what traditional oil producers are willing to offer.

Team Biden and its congressional allies can offset that decision, bury Putin’s ambitions, protect American allies and help American consumers. Oil and gas producers took a beating during the pandemic and are reluctant to invest money in what many perceive for good reason to be an unfriendly regulatory environment: The Biden administration initially exhibited more hostility to Canada’s Keystone XL pipeline than it did to Russia’s Nord Stream 2, and it has leased by far the smallest amount of federal land for drilling of any administration since Elvis Presley’s debut. The Democrats’ public toying with new oil taxes and assailing of banks for working with American energy companies will not ease those fears.

Instead of browbeating or threatening American energy producers, the Biden administration should publicly defend them and take some meaningful steps to help them out. Major leases would be a good start, as would clearing the path for more pipelines and infrastructure. The Confederacy shows Putin is playing a losing game, but Americans cannot win without competing.

Mike Watson is associate director of Hudson Institute’s Center for the Future of Liberal Society.

Mayor Adams, stop trying to fool people that the crime crisis is all in their heads