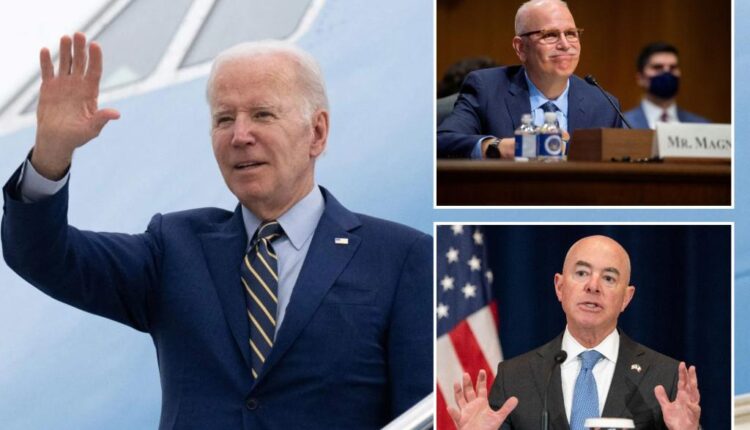 Chris Magnus, President Joe Biden’s border chief, resigned Saturday, ending a standoff with Department of Homeland Security Secretary Alejandro Mayorkas, who’d threatened to fire Magnus if he didn’t step down. It’s unclear whether the US Customs and Border Protection commissioner’s resignation is a simple personnel matter or represents a shift in White House immigration policy — but the administration is likely looking for a scapegoat for the humanitarian disaster at the southwest border it helped create.

Few Biden appointees had less experience than Magnus, whose career was largely spent in the upper Midwest and San Francisco Bay area. Though he did serve as Tucson, Ariz., police chief for five years before the White House tapped him to head CBP, his accomplishments there largely consisted of implementing “progressive” policies.

It took about seven months for the Senate to confirm Magnus on a largely party-line vote. By the time he assumed the position in mid-December 2021, migrant apprehensions at the southwest border had skyrocketed, from just over 400,000 in fiscal year 2020 to nearly 1.66 million in FY 2021. Overworked Border Patrol agents saw Magnus’ appointment as just another slap in the face.

Despite the ongoing border catastrophe he faced on arrival, Magnus focused his attention on attempting to change Border Patrol’s “culture.” By mid-October, unnamed administration officials were complaining to DC tip-sheet Politico that Magnus was disinterested in the migrant crisis and had fallen asleep during key meetings, prompting congressional Republicans led by Georgia Rep. Jody Hice to call for his resignation.

Such leaks usually indicate the target is being set up for a fall, but Magnus was seemingly oblivious. The last straw for Mayorkas was purportedly a pay dispute between the commissioner and Border Patrol head Raul Ortiz (who was not on board with Magnus’ “reforms”) and Magnus’ appearance — against the secretary’s recommendations — at a meeting of Border Patrol chiefs in El Paso.

While control of the House remains unsettled following the midterm elections, many in the Republican Party have called for Mayorkas’ resignation or even impeachment due to his failure to fulfill his statutory mandate to gain operational control of the border.

By forcing the embattled and objectively inexperienced Magnus out, Mayorkas’ scapegoating of the commissioner may have been an attempt to buy an insurance policy should Minority Leader Kevin McCarthy (R-Calif.) take the speaker’s gavel in January.

Alternatively, Magnus’ forced resignation may represent a shift in the administration’s border policies.

Rumors of a rift among Biden’s White House advisers on how to respond to millions of illegal entrants at the southwest border have been swirling for nearly a year, and illegal immigration was a key vulnerability for Democrats in Tuesday’s elections, accounting (by my estimates) for more than 7% of all GOP votes.

Magnus resigned the same day Reuters announced Cuba has agreed to accept DHS deportation flights. Border Patrol arrested more than 220,000 Cubans at the southwest border in FY 2022, nearly 10% of all apprehensions last fiscal year. Those migrants were probably banking on Havana not taking them back, and with this agreement, their future numbers will likely drop.

It’s notable that calls for Magnus to step down came just days after GOP Gov. Ron DeSantis coasted to re-election in Florida — a state with a significant Hispanic and immigrant population.

DeSantis appears to be a leading candidate to challenge both Biden and former President Donald Trump for the presidency in 2024, and the governor has demonstrated that strict but sensible pro-border-enforcement policies can capture wide swaths of the electorate.

Tuesday’s results notwithstanding, the octogenarian Biden faces strong headwinds in his re-election efforts, with his approval ratings in the latest Ipsos poll at just 39%. And immigration is likely his biggest vulnerability: The RealClearPolitics polling average shows Biden nearly 24 points underwater with Americans on the issue.

Few agents will miss Magnus. If Biden and Mayorkas think that the commissioner’s departure will satisfy voters and congressional Republicans concerned about a border in chaos, however, they are strongly mistaken.