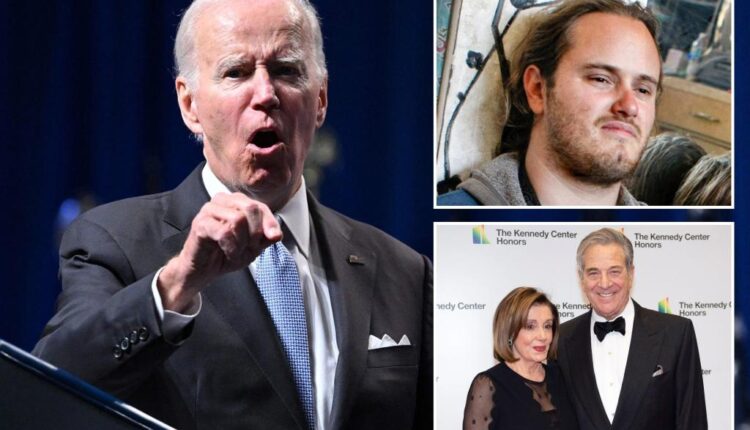 Barack Obama did the same, using a rally in Michigan for failed Gov. Gretchen Whitmer to rail against “politicians who work to stir up division to try to make us angry and afraid of one another for their own advantage.”

So did Hillary Clinton, who tweeted: “The Republican Party and its mouthpieces now regularly spread hate and deranged conspiracy theories. It is shocking, but not surprising, that violence is the result.”

So did Kamala Harris, demanding people “speak out against hate.”

So did every other Democrat surrogate, like Hollywood director Rob Reiner who tweeted: “Donald Trump is 100% responsible for this and Jan.6.”

So did all the Democrat-aligned media who delivered the same talking points in unison, along with dubiously sourced facts and a false depiction of the alleged attacker as a MAGA Republican in defiance of his drug-addicted hippy lifestyle, Green Party membership and the BLM and LGBT signs festooned across his sometime residence, a nudist commune in San Francisco’s gay Castro district.

It was a full-court press designed to flip the attack on the Speaker’s husband into an “October surprise” as Dems look down the barrel of a brutal shellacking from the voters next week.

It was their last desperate effort — because they have nothing else, apart from abortion — to smear their political opponents as violent “insurrectionists” and election “deniers” who are a threat to democracy.

For Biden and pals, everything is Trump’s fault, laughably even inflation, crime and the wide-open southern border.

Although San Francisco police made a point of saying that they don’t know the motive of the alleged attacker, David DePape, who was arrested at 2.30 a.m., reportedly in his underwear, at the Pelosi family home, that didn’t stop the president linking the attack to Jan. 6 less than 24 hours later.

During a speech in Pennsylvania, Friday night, Biden claimed DePape asked,  ”‘Where’s Nancy?’ — the same chant was used by this guy that they have in custody that was used on January 6, the attack on the US Capitol.”

The president repeated his theory to reporters the next day: “You can’t condemn the violence unless you condemn those people who continue to argue the election was not real, that it’s been stolen, all the malarkey that’s being put out there to undermine democracy . . . This talk produces the violence… the talk has to stop.

Problem is, Democrats have been trying to “stop the talk” since Trump came on the scene, with limited success, but a lot of violation of the First Amendment.

So far, they’ve successfully coopted Big Tech to censor speech they don’t like or stories politically damaging to Democratic candidates. They’ve successfully harnessed the FBI to bury inconvenient evidence like Hunter Biden’s laptop, and harass people committing wrongthink, like parents at school-board meetings, or Christian pro-lifer Mark Houck, raided by a SWAT team in front of his seven children.

But they have not been successful in changing hearts and minds.

If anything, the heavy handed, quasi-Stasi repression has had the opposite effect, red-pilling independents and even some Democrats — as the upcoming red tsunami at the midterms should show.

A case in point is the hilarious focus group MSNBC staged last week in Pennsylvania to try to show Trump voters as misinformed cult members. It backfired big time.

The focus group members pushed back on the media double standard when it comes to downplaying months of deadly riots before the 2020 election.

“Except on a much smaller scale, [the Jan. 6 riot ] looked the same as the Black Lives Matter riots,” said one.

They fact-checked the reporter, rebutting every Jan. 6 propaganda point: no cops were killed, there was zero evidence that people were “throwing excrement at the walls” and yes, Speaker Pelosi did have the “authority” to authorize the National Guard to back up the undermanned Capitol Police that day — as did her then-Senate Republican counterpart, Mitch McConnell — and they failed to do so, despite repeated requests from police chief Steve Sund, a mystery yet to be addressed.

“Our administration, I feel like, is using [Jan.6] as their Reichstag Fire,” said one of the focus group voters.

It was a stunning dismantlement of the left-wing media narrative about Jan 6, delivered respectfully by resolute and unrepentant Trump voters who were far more informed than the brainwashed reporter trying to expose them as bitter “clingers” and “chumps” for Morning Joe to laugh at.

Instead, MSNBC’s Joe Scarborough and co-host wife Mika Brzezinski were apoplectic that the truth had somehow sneaked into their programming.

“I don’t know where they’re getting their information,” Scarborough said. “Absolutely bizarre . . . They’ve been lied to and either they eagerly accept that lie or they’ve been duped . . . It is like a cult.”

Mika agreed: “I say this with respect. It’s not like a cult . . . It is a cult and cult leaders prey upon their members. They are victims of a cult and of disinformation.”

Talk about psychological projection — accusing your opponents of the exact thing you are guilty of.

It’s the same projection that Dem leadership is indulging in over the Pelosi attack.

If they want to call out divisive rhetoric, they should start with Biden’s “blood red” speech in Philadelphia when he ranted that “Donald Trump and MAGA Republicans represent an extremism that threatens the very foundations of our republic” and said it’s the duty of citizens’ to “confront extremists.”

Three weeks later, 41-year-old Shannon Brandt allegedly mowed down 18-year-old Cayler Ellingson in North Dakota because, he told police, the kid was part of a “Republican extremist group,” as if that were an excuse.

Where were Obama and Clinton and Harris then, calling out Biden for hate and rancor?

Or what about when, in the middle of the Democrats’ meltdown over the Supreme Court’s abortion decision in June, Californian Nicholas Roske allegedly traveled across the country to kill Justice Brett Kavanaugh, and was arrested outside the judge’s house at 1:50 a.m. armed with a tactical vest, Glock pistol, knife, zip ties, pepper spray, a hammer, screwdriver, nail punch, crow bar, duct tape and padded boots.

Biden and Co. never turned down the temperature on abortion then, not as pregnancy centers were firebombed and feral protesters continued to harass justices at their homes in defiance of the law.

So, sorry, Dems, you don’t get to take the moral high ground on free speech.

In any case, the real reason they’re so mad at the moment about what Biden calls “the talk” is because Elon Musk bought Twitter and suddenly the shadow banning has stopped, conservatives’ follower numbers are soaring and there’s even talk of unbanning prominent Republicans like Trump.

“The bird is freed,” Musk tweeted late Thursday when the deal was done.

It’s too soon to say whether the bird is truly free, but what is clear is that the Dems’ iron grip on the narrative is slipping — and it couldn’t come at a better time.

The mainstream media lied to me about conservatives