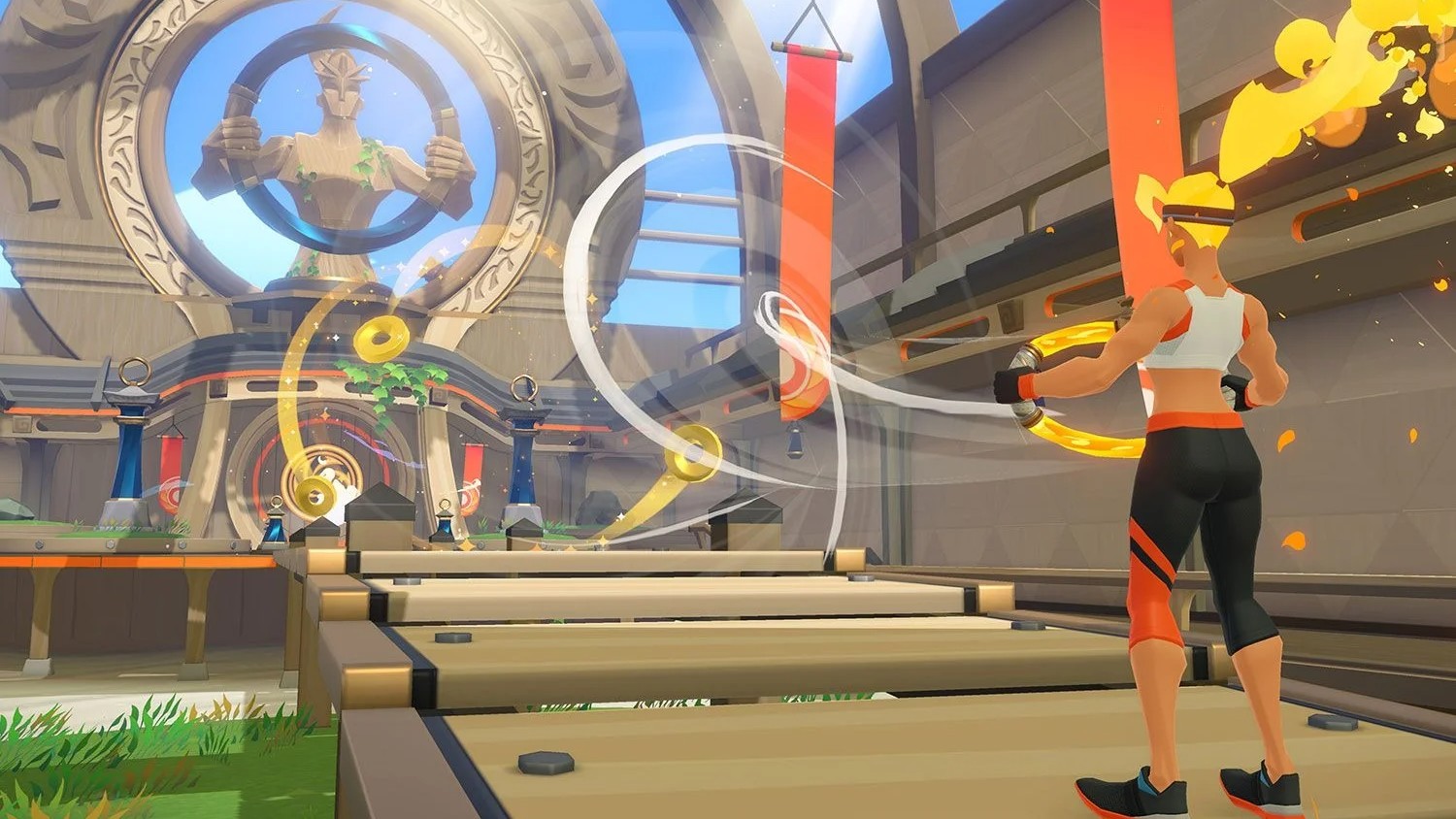 The Nintendo Switch is an adaptable system. Plug it into the base to play on the big TV screen at home, or carry it with you wherever you go for a portable experience. It’s such a great way to keep up with your fitness. With the right game, you won’t have to remember to go to the gym or quit your routine when traveling.

Ring Fit Adventure is everything that Nintendo fans wanted from the Wii Fit series and so, so much more. It gamifies the act of exercise in a way that is encouraging and supportive, making you forget you’re even exercising, as noted in our review.

Players progress through an RPG where they earn and collect new exercises that target various body parts. These exercises are used as the player’s means of attacking monsters scattered through the world, as well as the bosses that truly test your stamina. Difficulty is what you make it, and players can tailor their experience to their fitness level entirely. It’s one of the best out-of-gym exercise experiences for those who need a little direction.

Though these games are usually associated with the one game you play with family at Christmas, don’t let it fool you. Just Dance 2022 features stellar choreography from a wide variety of genres and time periods that will have you sweating quicker than you think. For a real challenge, take on the Extreme difficulty dances in the game’s built-in Sweat Mode!

With a Just Dance Unlimited subscription, you can access over 400 songs from across Just Dance’s 12-year history, meaning you can dance to a different song every day of the year and then some. If standard strength exercises aren’t your thing, then dance is a great way to get in some cardio.

Working from home can be rough on many people, which is why the development teams at Nintendo produced Jump Rope Challenge for free to shake things up a little. It’s a simple game but make no mistake — it’ll get you moving.

Players hold both their Joy-Con controllers in their hands the way that they would the handles of a jump rope, and simulate the act of, well, jumping rope! You can track your progress across several days, constantly challenging yourself to beat your own high score. And best of all, it’s free!

One-two, one-two, it’s Fitness Boxing 2! The sequel to the popular boxing game published by Nintendo features even more quality-of-life features than its predecessor.

Workouts are easier to see and understand, meaning that you won’t get your left and right jabs mixed up as easily. There’s also a two-player mode, so bring a friend to double the fun! The new characters feature tons of personality, making it a visual dream to look at, as we discovered through our hands-on testing.

While this is more of a sports game than a workout game, if you play Mario Tennis Aces while standing with the Joy-Con, your heart rate is sure to raise. Volley the ball across a wide variety of courts, with over 15 characters to choose from.

Players can use trick shots and zone shots to catch their opponent off-guard and score some sweet points. Two players can play, turning up the heat and cranking up the competitive intensity to 11. It’s surely one of the best Mario sports games out there, so if you love everyone’s favorite plumber, give this one a try!

Nintendo Switch Sports inspires feelings of nostalgia in a way that few games can. A sequel to Wii Sports and Wii Sports Resort, this game is great for both seasoned gamers and those new to the medium, as we found during our playthrough.

Simply hold the Joy-Con in your hand and go through the motions of six sports: tennis, Chambara, volleyball, bowling, badminton, and soccer. Play both locally and online against friends and family, even earning costume pieces for your character if you have a subscription to Nintendo Switch Online.

This isn’t always the case, but I’d recommend the original Fitness Boxing if you’ve played the sequel and want more. While not as visually stunning as the sequel, it still offers some solid workouts for your upper body.

If you’re looking for a quick workout before you start your day, this is the game for you. The game offers some great music that’ll keep your head bopping long after you’ve finished stretching.

Zumba: Burn It Up!

If you enjoy Zumba classes in person and want to bring them home, now you can with Zumba: Burn it Up! on Nintendo Switch. There are 30 songs to choose from, which is less than Just Dance 2022’s 40, but it’s a fun time nonetheless.

The moves in Zumba are simpler than those found in Just Dance, which is great for those who may find Just Dance’s choreography a bit more intimidating. You also have access to Superstar Instructors who can keep you motivated as you dance!

Can’t get enough of boxing? The latest IP produced by Nintendo doubles as both a fighting game and a boxing simulator, albeit not as intense as Fitness Boxing.

Charge those Joy-Cons, choose your fighter, and use those springy arms to box your way to the top in ARMS! When we played the game for our review we enjoyed the engaging mini-games, the ability to compete online, and the option for local multiplayer.

Nintendo Switch Sports may have more sports planned for future updates, but sometimes you get tired of the same old things.

Sports Party offers all-new sports like golf, frisbee, basketball, jet skiing, and skateboarding for that Wii Sports Resort feel. Play with up to four people and customize your character for some fun in the sun — all on your Nintendo Switch.

For those who couldn’t already tell, the Nintendo Switch lends itself really well to boxing games with how easy it is to hold the Joy-Cons in each hand.

Knockout Home Fitness offers workouts that target many body parts, even implementing some aspects of martial arts in the routine. For cardio lovers, this is a great addition to your Nintendo Switch game library.

Committing to working out isn’t always easy. It can be dreaded and feel like just another item on your to-do list. But with these games, working out is made a little more fun. For example, playing an adventure game and defeating monsters in Ring Fit Adventure sounds way more fun than doing basic squats at the gym as you stare at yourself in the mirror.

If that’s not your style, and you like to include friends or an accountability partner, there are options for that too! Dance the night away in a way that’s easy for others to join in on, with or without a Joy-Con, by starting up Zumba Burn It Up! or Just Dance 2022. Or, bring in the element of music as you track your BMI and calorie burn more traditionally with Fitness Boxing 2: Rhythm and Exercise. Get out your sweatpants because these are the best Nintendo Switch games for working out. However, you choose to do it, get your fun in, and get fit!