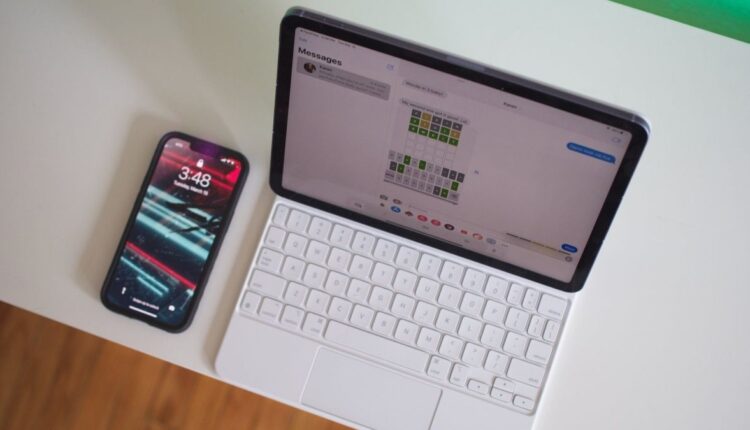 An iPad is an excellent tool for any computer user. It doesn’t matter if you’re a digital artist, high-pressure professional, or you just want a big screen for checking your email; an iPad can be an excellent addition to your computing life. For most people, the iPad Air 5 is going to suit most of your tablet needs just fine.

While the iPad Air 5 isn’t as massive of a change as last year’s iPad Air 4 was over the third generation, it still has everything most people could want in an iPad.

It still looks like the fresh and stylish iPad Pro, meaning it has the flat sides and nearly edge-to-edge screen of the more expensive tablet. Its 10.9-inch Liquid Retina display with 2360×1640 resolution doesn’t have ProMotion but is as sharp as ever. It supports the Apple Pencil 2, the best stylus for the iPad you can buy and is equipped with USB-C, meaning it connects to hubs, hard drives, and even displays. Plus, it comes in space gray, starlight, pink, purple, and blue.

So, what are the big changes to the new iPad Air? Well, it’s now powered by Apple’s M1 chip, the very same M1 that not only powers the current iPad Pros but also Macs. The M1 chip makes moving through iPadOS seamless and gives the iPad Air 5 enough juice to handle anything you throw at it; whether it’s a marathon gaming session, a bunch of intense image editing, or anything else. Plus, Apple also gave the Wi-Fi Cellular version of the device the 5G upgrade, so if you have access to a 5G network, your iPad Air can use all that speed!

It’s not all sunshine and roses, though. With the increase in starting price, I’d have hoped that Apple would also boost the base level storage. But the iPad Air 5 will start with 64GB, and you’ll again have the option to bump that up to 256GB if you need more space.

The iPad Air 5 strikes a great balance of price, power, and portability, complete with Pencil and Smart Keyboard support.

Great performance for the price

It’s not the most powerful of Apple’s tablets, but the iPad (2021) is the perfect tablet for a lot of people. While it’s only powered by the A13 Bionic, the entry-level iPad is a highly capable machine for most tasks. If you’re a casual tablet user or your computing needs are just fairly light, consisting mostly of web browsing, email, working with documents, and some gaming, the 10.2-inch iPad is a great choice for something portable.

The front-facing camera also got a huge upgrade from the 2020 model. The iPad (2021) can take full 1080p video, making it an awesome machine for FaceTime and video calling. Plus, the microphone (even though it didn’t receive an upgrade) is pretty good for your standard video call or FaceTime with some family or friends, and the whole experience is made even better by the inclusion of Center Stage. When on a FaceTime call, your camera will intuitively stay focused on you, even if you happen to move around. So if you move to one side of the frame, it will “pan” over to you and do its best to keep you in the center of the frame. It will even zoom out to capture multiple people in the frame; it just makes video calling so much better. That’s the power of Center Stage, and it’s a great feature.

It won’t have the power of something like the iPad Air, or even the iPad mini 6, but it’s hard to beat its price when you’re looking for a quality tablet.

The 10.2-inch iPad is the best budget tablet that Apple has ever produced and a great accessible computer for anyone.

The best small tablet you can get.

More expensive than before

The iPad mini 6 is the most significant update to the iPad mini line since the introduction of the first-generation model with a complete redesign, larger display, huge processor boost, and much more. It impressed the entire team at iMore for its blend of portability and power, and it proves that the iPad mini and its fans are here to stay.

Now with Apple Pencil 2 support, the iPad mini 6 excels as a beautiful, tiny drawing tablet. Taking notes, doing sketches, or just controlling your iPad mini 6, the Apple Pencil 2 brings all the upgrades to the smallest iPad Apple makes. Plus, its 8.3-inch screen is a beautiful and larger display than an iPhone, making it awesome for watching videos or playing Apple Arcade titles on the goal.

With upgrades to the camera, storage options, and the updated design, it’s impossible to pass up on the iPad mini 6 if you’re a fan of small tablets.

The iPad mini 6 is small but mighty. If you love small tablets, this is the tablet for you.

Powered by the M1 chip.

The 12.9-inch iPad Pro (2021) is the best tablet for anyone serious about tablets. Its large screen is great if you want to use a tablet instead of a laptop, and it offers an excellent canvas for visual artists, with plenty of room for drawing, digital painting, and more. Plus, the 12.9inch iPad Pro (2021) comes with a fancy new mini LED display, which Apple calls, Liquid Retina XDR. It’s perfect for HDR content, with the ability to reach a peak brightness of 16,000 nits, delivering that high contrast experience HDR needs. There’s plenty of space to use apps side-by-side, which is great for all kinds of work. The new built-in magnetic induction area that charges and stores the second-gen Apple Pencil is also a nice addition.

While last year’s model got a rear camera upgrade, this iPad Pro (2021) got an upgrade to the selfie camera. It’s now a 12MP ultra-wide-angle lens that can record 1080p video up to 60 FPS. It also comes with a feature known as Center Stage, which allows the camera to follow you and keep you in the center of the frame as you move around on FaceTime calls.

The USB-C port is still on the iPad Pro (2021); however, it got a huge upgrade by becoming a Thunderbolt 3 / USB 4 port. This will make plugging in Thunderbolt accessories like displays, docks, hubs, and hard drives possible, so you can get some serious work done. An increasing number of accessories and devices, be they SSDs or cameras, come with USB-C cables, so being able to plug something in without a special Lightning-to-whatever cable or an adapter is great.

The iPad Pro is also very powerful and supports powerful apps. While they might not be as full-featured as their desktop counterparts, apps like Lightroom and Affinity Photo make photo editing a breeze, all while providing much of the flexibility and power of the desktop apps.

All pro, but in a smaller size.

Just as powerful as the 12.9-inch model

Lighter than the bigger iPad Pro

Not as expensive as the bigger iPad Pro

While you might not think it on paper, there are significant differences between working on a 12.9-inch iPad Pro and the 11-inch model. With the 11-inch iPad, you’re working with almost two inches less in screen real estate, which is a lot on mobile devices. It’s not as great for working with apps side-by-side, but it’s noticeably smaller and lighter than the bigger iPad Pro.

Great for a wide variety of tasks, the 11-inch iPad Pro is the tablet to get if you want something smaller than the largest tablet that Apple makes while still wanting or needing its power.

All of the power of the larger iPad Pro in a smaller form factor and a great tablet for mobile artistic work and note-taking.

For most people, the iPad Air 5 is the ideal iPad to get. It’s much more powerful than the base model, but not nearly as expensive as the pro tablets. It comes packed with Apple’s M1 chip for speedy performance and even offers 5G if you decide to go with the Wi-Fi Cellular model. Though there are sacrifices, the middle child of Apple’s tablet family provides both performance and price benefits that will appeal to most people. And while you’ll probably be just fine with the 64GB model, if you’re unsure, go ahead and spring for the 256GB version for that extra peace of mind.

No, the iPad Air 5 doesn’t get bigger than 10.9 inches. It’s not as good as the 12.9-inch iPad Pro, for instance, at using two apps side-by-side. But it’s a great machine for most tasks, from drawing with an Apple Pencil to typing out a major report with the Smart Keyboard. The iPad Air 5 even supports the second-generation Apple Pencil, a step up from the iPad Air 4. Aside from screen size, the only real tradeoff to note is the charging and storage.

But there are always workarounds to be found for many shortcomings, and the iPad Air is an excellent tablet for most people. Casual tablet users, people looking to add something more mobile but bigger than a phone to their workflow, students, and even a lot of professionals should all consider the iPad Air 5 when they go to make their tablet purchase.

Round up of today’s best deals