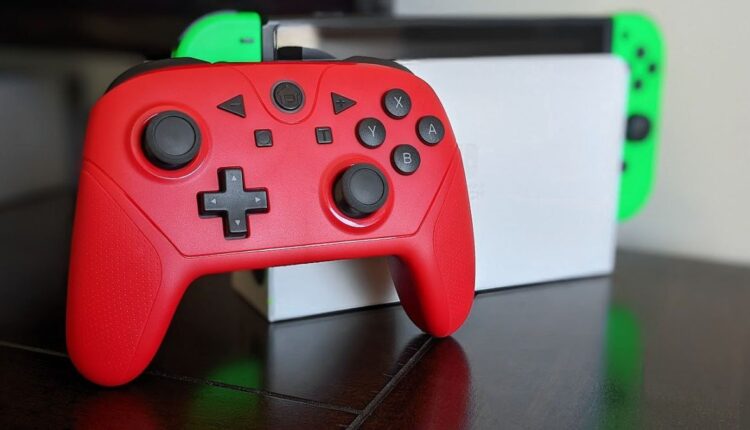 Shopping for Nintendo Switch consoles, accessories, and games can be an expensive affair that quickly drains your wallet during holiday shopping. But if you know where to go to get great game deals and know which third-party accessories to trust you can get everything you’re after without spending as much. You might even be able to save enough money to purchase even more gifts this Black Friday or holiday season than you would have otherwise. Whether you’re buying for yourself or trying to get the perfect holiday gift for someone else, these are the best Switch accessories, games, and consoles that you can get on a budget.

Better than Pro Controller | From $29 at Amazon

The official Nintendo Switch Pro Controller is pricey selling around $80 or higher, but fortunately, I found in my YCCTEAM Game Controller review that this gamepad offers everything I need to play the best Switch games but at less than half the price. It even offers amiibo scanning, rumble, and motion controls unlike many officially licensed third-party controllers.

Charged and ready for multiplayer |$17 at Amazon

The Switch is home to so many multiplayer games and many of them can host four players or more as long as you have enough controllers to go around. This accessory helps keep all your extra Joy-Con charged up in a compact stand, so they’re always ready for impromptu game nights and family fun. The best part is that it doesn’t cost much compared to competitors.

Third-party Joy-Con | From $37 at Amazon

Nintendo’s official Joy-Con are essential for playing several different Switch games, but they’re expensive at $80 a pop. If you plan on playing multiplayers with the family or for game night, then you’ll want to have some extra ones handy. Fortunately, these third-party options aren’t that expensive. Plus, they come in several fun colors. When I tested them in my YCCTEAM Joypad Controller review I found that the motion controls and rumble worked excellently.

It’s a hard fact that the Switch and Switch Lite only offer 32GB of internal storage while the Switch OLED isn’t much better at 64GB. This means that players quickly run out of room for games after just a handful have been downloaded. Fortunately, this reliable microSD card costs less than other competitors while greatly increasing the storage space on any Switch device.

Protect that console | From $17

You’ll want to get a carrying case to protect your Switch from accidental drops or bumps. Thankfully, this one gives you that protection at a low cost and even comes with a small storage space. It fits the Switch as well as the Switch OLED. Some Switch cases can cost $30 or higher so this is a great option that gives you everything you need at a low price.

More comfortable grip | From $17 at Amazon

Anyone who has played a Nintendo Switch OLED in handheld mode knows how uncomfortable it is to hold the console since it doesn’t have ergonomic handholds. Fortunately, this inexpensive accessory fixes that while also providing a kickstand and cartridge storage slots. It’s one of the best priced Switch OLED grips on the market.

Nintendo is very rigid on its console pricing, so you won’t find a Switch OLED dipping very low this holiday season. However, it’s an amazing device that has a large library of hits. Plus, that new OLED display makes game visuals really pop. If you want the best the Switch system has to offer, you’ll want this console.

The hottest Switch this holiday | $360 MSRP

The latest Pokémon game released this November and to commemorate it, Nintendo created a limited edition Pokémon Scarlet and Violet-themed Switch OLED. You likely won’t find it going on sale this year as it’s been a very popular item and it likely won’t be available for much longer either.

Splatoon 3 released earlier this year and has been a hit around the world. As part of a way to celebrate the multiplayer game’s release, this special edition Switch OLED launched. It sells for slightly more than the base Switch OLED due to the theme, but it likely won’t go on sale this holiday season since it constantly sells out when in stock.

The Nintendo Switch base model is no longer the latest and greatest option, but it still works plenty well and costs $50 less than the Switch OLED. Play the Switch’s large library of games in handheld mode or on TV. There are tons of multiplayers as well as single-player hits out there.

This is the smallest Switch system out there and it costs less than the others because it does not include detachable controllers and it cannot dock to a TV. That means it isn’t a great choice for couch co-op multiplayer games, but it’s an economical option for anyone who likes single-player adventures.

Nintendo Switch gaming is a very expensive hobby to keep up with between the costly console, multitude of accessories, and large library of games. The consoles themselves don’t tend to go on sale very often, but fortunately the games and accessories do. Not to mention, there are plenty of third-party Switch controllers out there that work just as well if not better than the official ones.

Just remember that many games on Switch require motion controls and rumble to effectively play. So if you go looking for third-party gamepads make sure they have the features you need. In regards to cases, the Switch OLED is slightly larger than the Switch and both of those consoles are significantly larger than Switch Lite, so make sure you grab a case that fits the console you’re buying for.