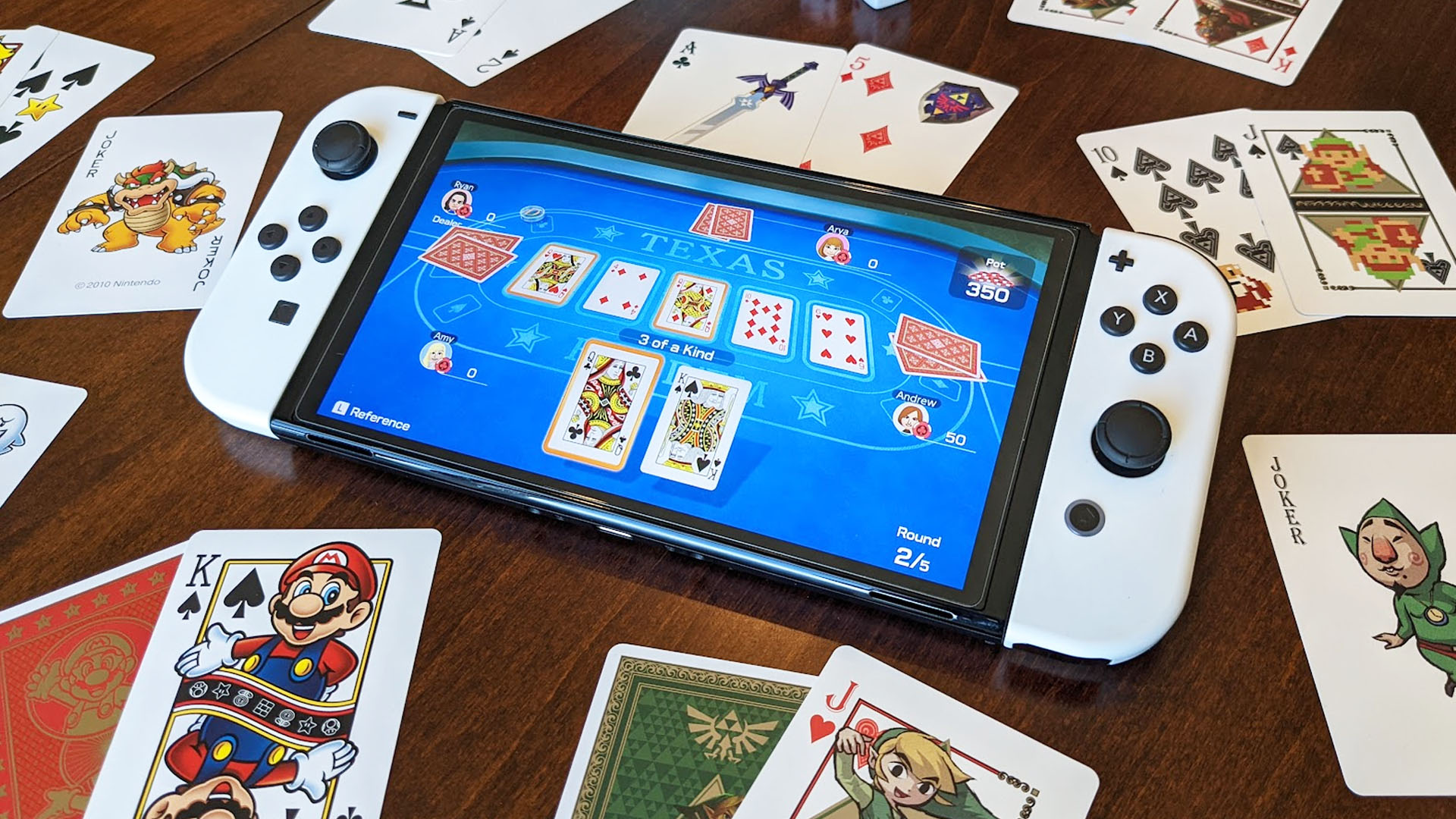 Card games have brought people joy for hundreds of years, turning an item as simple as paper into complex systems that test our minds and critical thinking skills. They come with their own sets of problems, however, as cards can be flighty and are prone to getting lost or damaged.

Luckily for Nintendo Switch fans, it’s now possible to keep these games all in one place on your console. Here are the best games that feature cards on the system.

Set in 18th-century France, you’ll be playing as a young man accompanying the shady Comte Saint-Germain across the country, learning card tricks along the way to swindle unsuspecting rich people out of their money.

From simple slights of hand to full-on deck switching, you’ll not only have to execute a series of tasks to perform your trick, but you’ll have to be quick about it as well. The simplest hint of hesitation can make your opponents suspicious, which can lead to your demise if you’re not careful.

Donate to the Résistance with your earnings to change France forever. And be careful not to spill that wine!

Voice of Cards: The Isle Dragon Roars is an RPG laid across a virtual tabletop where everything is made of cards. The landscapes, player characters, and items in the shops are all made of cards, all beautifully illustrated.

Battles take place on a velvet-lined tabletop, with potions, attacks, and special moves being cards whose damage output and effects are sometimes determined by the dice you roll. Explore damp caves, quaint towns, and uncover the mystery of the very dragon you and your party have set out to slay.

While this game is a platformer with a built-in card game, I’d highly recommend it for both aspects. Before joining The Order of No Quarter, the arrogant King Knight sets out on a journey to be the best player in the land, aiming to build his deck and master the game of Joustus.

You can play against CPUs, or through local and online multiplayer with others. For those playing at home with friends and family, only one copy of the game is required to play. Other players can get in on the action using the Guest Pass application, available as a free download. For some multiplayer games, one console per person is required.

In this deck-building roguelike game, players test their wits as they make select cards that ultimately decide their fate. Like with many roguelikes, death is not the end and only makes you stronger. Learn enemy attack patterns and select cards from your arsenal, expanding and fleshing out your deck as you go.

Journey up the titular spire, with no two runs being the same, as you experiment with different deck pools and increasingly difficult challenges.

Signs of the Sojourner

Signs of the Sojourner is a unique game that features both visual novel and card-based elements. After your mother passes, you decide to take over her caravan shop. However, you must travel far and wide to acquire wares for sale, meeting new people on the way.

Match personality symbols with your conversation partners in a domino-style manner to build a relationship with them and purchase items for your mother’s caravan shop. The matching mechanics are surprisingly deep, with story and dialogue to match.

Set in the world of the various Witcher games, Thronebreaker: The Witcher Tales is a card game that features a complex and thrilling story. The gameplay centers around visual novel elements and is supported by an updated and improved version of Gwent, the card game that took Witcher fans by storm.

Don’t be deceived by the gorgeous art style — Thronebreaker: The Witcher Tales has players make difficult decisions surrounding their soldiers and alliances, testing their strategy skills to their limits.

You know it, you love it, it’s the iconic UNO, where the name of the game is to lose all your cards! This classic card game has you match numbers and colors with each other, with a wild card or two thrown in.

It’s easy to learn, yet difficult to master, and managing your cards will be a top priority. Play solo, locally, and online with others for a satisfying experience. Above all else, be sure to pay attention!

SteamWorld Quest: Hand of Gilgamech takes an RPG and fills it with action-packed cards. Build a party, choose up to eight cards per player, and manage each deck as you move through hordes of enemies to fulfill your quest.

Set in a stunning steampunk world, SteamWorld Quest: Hand of Gilgamech builds on the critically acclaimed SteamWorld game series while breathing new life into it with fresh mechanics.

Shuffle up your library

Card games offer their own unique challenge in that they test your cognitive skills rather than your button-mashing skills. Slipping into a flow as the cards appear on your screen is not only cathartic but extremely satisfying.

My favorite of the bunch is Card Shark, as there’s nothing I enjoy more than building up simple skills to pull off complex heists. The stakes are high and there’s even a permadeath mode, for those who enjoy a challenge.

For platformer lovers, Shovel Knight: King of Cards is a joy to play. King Knight, despite his hulking armor, offers smooth movement throughout each level. The writing is witty and made me laugh out loud several times, and Joustus is a deceptively simple game that had me scratching my head on multiple occasions.

If you’re looking for bang for your buck, Clubhouse Games: 51 Worldwide Classics offers over 10 card games to learn and master — and 40 others to boot! You’ll want to break this one out at parties to challenge your friends or hop into an online multiplayer session to up the ante.

Whether you’re looking for a relaxing game of cards or a high-stakes RPG to test your wits, there’s more than enough to experience on your Nintendo Switch.