As migrant crisis deepens, Mayor Eric Adams faces a threat that could dominate his time in office 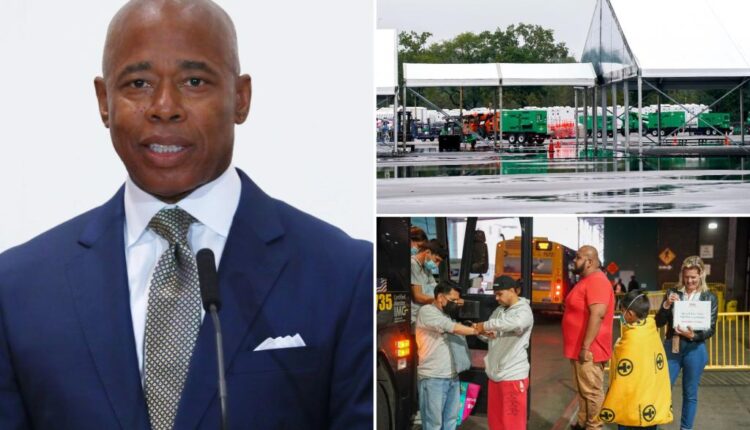 With Mayor Adams blasting both Republicans and the far left over migrants, he would, in most cases, be called a centrist. This is not one of those cases.

A better, more accurate way to describe his predicament is that the mayor has trapped himself in isolation. His rash decision to take in as many as 75,000 foreign migrants was an unforced error that threatens to dominate his mayoralty and demote combating crime to a second-tier consideration.

This is not exactly a replay of Nero fiddling while Rome burns, but there is a whiff of smoke. For not only is Adams alone on his sanctuary island, nobody is coming to rescue him.

Certainly not Gov. Hochul who is, as usual, silent, nor President Biden, whose open-border policies caused this national calamity in the first place.

Every quagmire needs a metaphor, and it came Monday with Adams’ sudden decision to dismantle the tent city workers were building for migrants in an Orchard Beach parking lot after it flooded. The area got only about half-an-inch of rain, yet that was enough for City Hall to pull the plug and move the facility to Randalls Island.

News alert to City Hall: it also rains on Randalls Island. And snows, too.

Although it’s early in the process for a post-mortem, any analysis of what the mayor was thinking when he got into the migrant mess must consider the imbalance between his tall ambition and his short tenure in City Hall. It’s no secret he thinks he’s presidential timbre and boasted he would be the new face of the Democratic Party and show America how to run a city.

His point was that he would solve the surging crime problem and get New York working again after the COVID shutdowns and work-from-home disruptions to the economy.

He’s made some progress on both fronts, but it’s now clear the partisan angle embedded in his ambition led him off course. Long after The Post reported that Biden was secretly shipping migrants to the region, Adams turned all his venom on Republican Gov. Greg Abbott of Texas for sending mere busloads of them to Gotham.

In another contradiction to a principled motivation, Adams agreed to take thousands of migrants from the Dem mayor of El Paso, Texas.

None of this makes any sense.

Although Adams has asked the feds for a whopping $500 million to care for the migrants, he has gotten zilch. If he gets anywhere near the amount requested, based on a per-migrant basis, the border states would be owed tens of billions of dollars.

The upshot of his conflicting positions is that Adams’ approach is unworkable. While he is correct that the far-left wing of his party talks a good game but does nothing to help the migrants, that’s not a new insight.

The left never helps anyone except itself. That’s the nature of the beast and its destructive policies.

A former cop, Adams ran for mayor in opposition to the loony left’s defund the police movement last year. So why would he expect better of them on migrants?

If there is any positive sign in the mayor’s outburst, it is the possibility that it’s beginning to dawn on him that he needs to climb down from the soapbox and get out of the bind he created.

Fortunately, the original solution is still available and staring him in the face.

Abbott’s plan was to get Adams and Dem mayors in Chicago and Washington, DC, to feel the border states’ pain, and enlist their help in getting Biden to solve the crisis that has allowed more than 4 million migrants to cross the Mexican border in just 20 months.

That’s exactly what Adams should do — pick up the phone, call his buddy Biden and tell him to seal the border ASAP.

Until he does that, Adams’ failure to mobilize Hochul or the left to his cause has inadvertently proved Abbott’s point — that no part of the United States can or is willing to handle so many unvetted migrants in such a short period of time.

The lefty enclave only briefly housed and fed the 50 migrants Florida Gov. Ron DeSantis sent there. After two days, they were bussed to a military base on the mainland while the island’s Grand Pooh-Bahs raised a glass to toast their own compassion.

The notion that New York could house, feed and care for an additional 60,000 is a pipe dream when it can’t adequately accommodate those already here. How many tent cities can you build, and where?

And don’t forget there are still 58,000 other homeless people living in the city’s sprawling shelter network, and that population always grows over the winter.

Meanwhile, murder and mayhem continue to destroy the city Adams vowed to save. The mayor got an earful Monday from grieving parents when he attended the Long Island wake for Lt. Alison Russo-Elling, the FDNY paramedic fatally stabbed in Queens during a lunch break.

Mom Catherine Fuocco did most of the talking, telling the mayor, “Please give me back my city,” and, referencing the mayor’s NYPD experience, said “You know what to do,” a witness told The Post.

Fuocco was absolutely correct — Adams knows what to do about crime. Unfortunately, by taking his eye off the ball, he is creating doubts about whether he’s willing to do it.

Reader Ruth Cohen sees where Dems are going, writing, “Ron DeSantis is the new target of their smear techniques. Fortunately, he is smart and has good intentions. But soon we will have DDS, DeSantis Derangement Syndrome. Incurable.”

Joe Biden’s latest fable — that he was “sort of raised in the Puerto Rican community at home, politically” — recalls a famed story about Huey Long, the hell-raising Louisiana pol of nearly a century ago.

As a version of the story goes, Long, nicknamed “the kingfish,” is preaching brotherhood by claiming his extended family includes both Catholics and Protestants. On Sundays, Long tells an audience, his father would first drive the Catholics to Mass in the family car, then return home and take the Protestant wing to its church.

Amid hearty applause, a friend approaches Long and whispers, “I didn’t know you had Catholics in your family,” to which Long casually replies, “Hell, we didn’t even have a car.”

Your good news headline of the day:

Apple TV Plus debuts the official trailer for season two of Acapulco|replace({“|”:”|”})