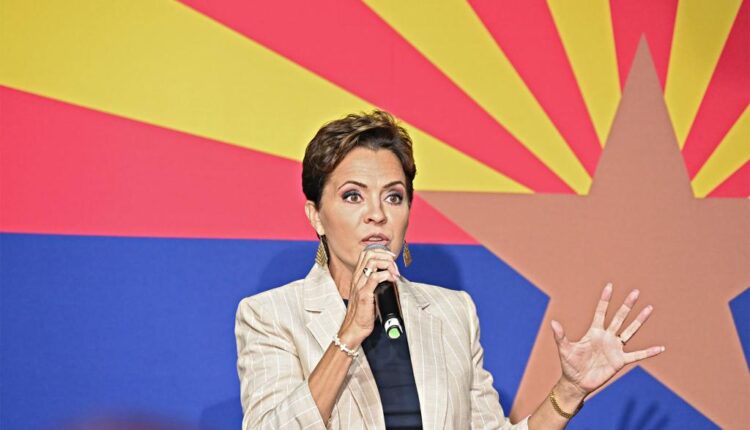 The “Stop the Steal” die-hard and political novice who is running for governor of Arizona looked like a no-hoper, but now has to be favored to win in November.

Lake is a new politician who is reminder of the oldest of conventional political adages: Candidate quality matters. The exceptionally poised former news anchor is a stand-out performer on the campaign trail.

She is in a line of women champions of a grassroots, right-wing populism that runs from Phyllis Schlafly to Sarah Palin to Marjorie Taylor Greene, spanning the 1950s to today.

These are wildly divergent figures — Schlafly was one of the most consequential leaders of post-war conservatism; Greene hopes to finagle a seat on the House oversight committee should Republicans take back the majority.

Yet there are common threads in this line of “momma bear” populists: a fervent opposition to the elite; a disdain for the Republican establishment; a hatred for the press; a dark or frankly conspiratorial view of the world; a fervent base of support from activists and ordinary voters; and a fearlessness and instinctive combativeness that made or makes these women even more hateful to their opponents and admirable to their supporters.

What’s new about Lake and Greene is that loyalty to Donald Trump and the insistence that the 2020 election was stolen are now the litmus tests for this populism. When Schlafly got her start, the intensity of someone’s anti-communism was the measuring stick.

A single-minded devotion to Stop the Steal is not the most natural calling card in a closely contested state like Arizona, but Lake’s other qualities have made up for it.

As a local news anchor in Phoenix for 20 years, she entered the race with name recognition and a reservoir of credibility. It’s a little as if Walter Cronkite, back when network anchors were still near the height of their powers, decided to jump in the Democratic primary against President Jimmy Carter in 1980.

Then, there’s the fact that Lake loves the microphone and camera, and they love her back. She has communication skills that an army of consultants could never impart to a candidate with less experience. Lake has basically had more than 20 years of media training, and it shows.

TV news anchoring is about connecting with the viewers and projecting authority, and these are abilities that are directly transferable to the political realm. If you seem unflappable, people will think you are unflappable, and that creates a sense of command.

Lake has made a point of snapping back at the media constantly. Knowing how valuable these exchanges are for motivating Republicans, her campaign is careful to get them on video and spread them widely.

On top of all of this, she is running against perhaps the worst Democratic gubernatorial candidate in the country. The Democratic Secretary of State Katie Hobbs feels more like a candidate for the board of the Central Arizona Water Conservation District than the highest elected office in the state.

If Lake wins, she instantly jumps the line of Trump’s potential vice president candidates, should he be the nominee again. There won’t be many other major officeholders as enthusiastic about his 2020 fixation as Lake. She’d be the female governor of a crucial swing state. And she’s thoroughly absorbed the Trumpian practice of politics as combat and theater.

There’s a long way to go from here to there. If nothing else, though, we now know how foolish it was for Democrats to subtly assist Lake in the GOP primary. They thought they were propping up a patsy, when they were really helping create a star they may have to fear and loathe for years.