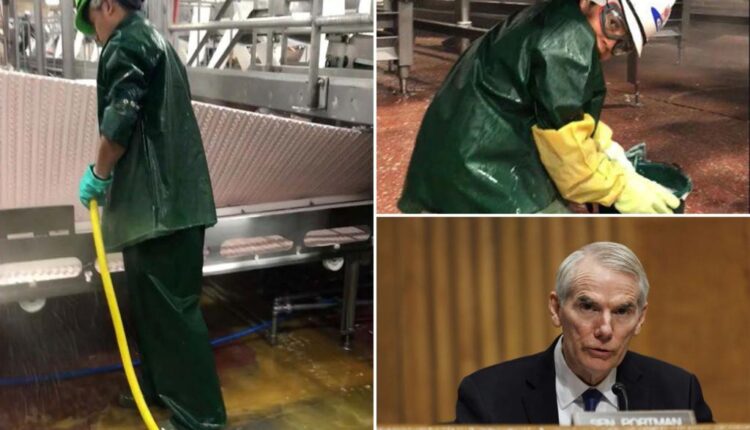 A Department of Labor investigation alleges that a Midwest food sanitation provider “employed at least 31 children — from 13 to 17 years of age — in hazardous occupations,” with several suffering on-the-job injuries. The company denies those allegations, and many facts aren’t known — but this case raises the distinct possibility that unaccompanied alien children apprehended at the border and released by the government are being forced to work in slaughterhouses.

I come from a family of butchers and can assure you it is a tough business. DoL’s 61-page court-filed brief will give you a primer, and it’s not for the faint of heart or stomach.

To be clear, nothing in DoL’s filings indicates that any of these child workers were aliens. The brief, however, explains that DoL investigators “conducted all interviews in Spanish, with Spanish-speaking investigators, as the minor children spoke Spanish.”

Those children’s ages were verified by reference to school records — including middle-school documents. Perhaps there’s a large population of US citizen and lawful alien minors attending school in the Midwest who aren’t conversant in English, but in my three decades of immigration experience, it’s not likely.

That suggests some if not all of those 31 children are recently arrived aliens. Because DoL doesn’t disclose the children’s immigration statuses, however, I have no idea how long they’ve been here or if they’re here legally or illegally.

What is clear is that hundreds of thousands of alien kids have entered illegally since President Joe Biden took office. Border Patrol agents have apprehended nearly 286,000 unaccompanied child migrants at the southwest border since Feb. 1, 2021.

Under the Trafficking Victims Protection Reauthorization Act, DHS must transfer unaccompanied alien children (UAC) from “non-contiguous countries” (i.e., countries other than Mexico and Canada) to the Department of Health and Human Services, most for placement with “sponsors” in the United States.

When TVPRA passed in fiscal year 2009, 82% of all UAC apprehensions involved Mexican nationals. Five years later, 87% of unaccompanied child migrants came from non-contiguous countries and were eligible for release under that law. Smugglers find the loopholes in our laws quickly.

Of the unaccompanied child migrants apprehended under Biden, more than 241,000 — 84% — came from non-contiguous countries, and HHS released nearly all of them to sponsors in the United States.

But HHS does a poor job of keeping track of them. Congressional disclosures from March revealed the department had lost nearly 20,000 UACs it had released, and a September report from HHS’s inspector general blasted the department’s performance in tracking and releasing unaccompanied children.

Most significantly, deficiencies in the search capabilities of the online management system HHS relies on to track and release those children hindered case managers’ ability to determine whether would-be sponsors had already sponsored other UACs.

That’s a problem because unaccompanied children have been released to unscrupulous sponsors and trafficked in the past, with some forced to work in Dickensian conditions. Sen. Rob Portman (R-Ohio) led the charge that uncovered the vulnerabilities in the system that allowed that to occur, but Portman’s retiring in January to make way for Sen.-elect J.D. Vance (R).

This isn’t a partisan issue. Someone — Republicans and Democrats from the Senate and House Oversight committees, the administration itself or, even better, all of them — needs to get to the bottom of whether unaccompanied children are being released to sponsors who are then forcing those children into dangerous labor.

If citizen or lawful alien parents are allowing 13-year-olds to work the late shift cleaning agricultural plants, that’s a serious issue, and a lot of people beyond just one employer should be held to account.

If, however, HHS can’t properly care for and release UACs because the Biden administration has no intention, let alone a plan, to deter alien children from entering the United States illegally — and more important to prevent their adult family members and smugglers from facilitating their entry — it’s a scandal of the highest order, and heads should roll.

President Donald Trump was excoriated for the treatment of UACs on his watch, but the biggest complaint about Trump’s HHS was that it was vetting potential sponsors too thoroughly and wasn’t releasing kids quickly enough. I don’t remember many DoL complaints about alien children working in slaughterhouses between 2017 and early 2021, however.

If DoL’s allegations are true, Congress, the administration and the press must get to the bottom of how 31 Spanish-speaking children were working in hazardous conditions in meat-processing plants in America’s Midwest. I have my suspicions, but only they can uncover the facts, and they must do so — without faction or favor.