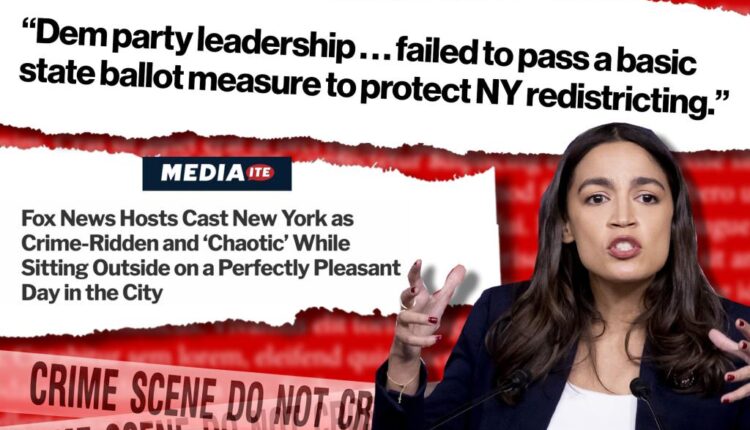 We say: Earth to AOC: New York did pass a ballot initiative to “protect” redistricting, and keep it fair and nonpartisan, in 2014 — and this year  Democrats tried (but failed) to flout it. Did you mean to criticize them for not getting away with their illegal scheme?

“The level of voter suppression [in Georgia] is beyond anything that we saw in 2018 … We can’t say [the election] is fair.”

We say: For Johnson (and much of the left), an election can only be “fair” if Democrats win in a landslide. The truth? By Tuesday, 4 million Georgians had voted — more than in any other midterm in the state’s history (though the Senate race between Herschel Walker (R) and Sen. Raphael Warnock (D) is set for a runoff). Maybe Georgians should thank a 2021 state law that expanded early voting and boosted the number of voting stations. You know, the one President Biden called “Jim Crow in the 21st Century”?

We say: On the eve of the election, with crime a top voter concern, Mediaite tried to claim that New York City is a “mostly peaceful” place. Never mind that hundreds of people are murdered each year, subway riders fear for their lives and serial shoplifters have forced store closures; Fox News hosts had the nerve to flag the crime and slime “on a perfectly pleasant day.” Such a skewed, idiotic “analysis” — couched in a cheap, deceptive shot at Fox News — is what passes for “independent” media “fact-checking” these days.

We say: “Literally kill”? OK, Rob Reiner has long hated Republicans and falsely accused them of lots of things, but what on earth was Meathead talking about this time — and why did a national network host (MSNBC’s Joy Reid) let him get away with such an ugly, ludicrous and divisive slur?

“There are legal analysts that say . . . [a Supreme Court ruling against Harvard’s affirmative action program] could impact Brown v. Board.”

We say: Huh? How in the world would a Supreme Court ruling that insists college applicants be treated equally in admissions regardless of race “impact” Brown v. Board of Education, which similarly says public-school kids must be treated equally and not separately regardless of race? It’s just another case of disingenuous fear-mongering by another flagrantly biased reporter and her “legal analysts.”