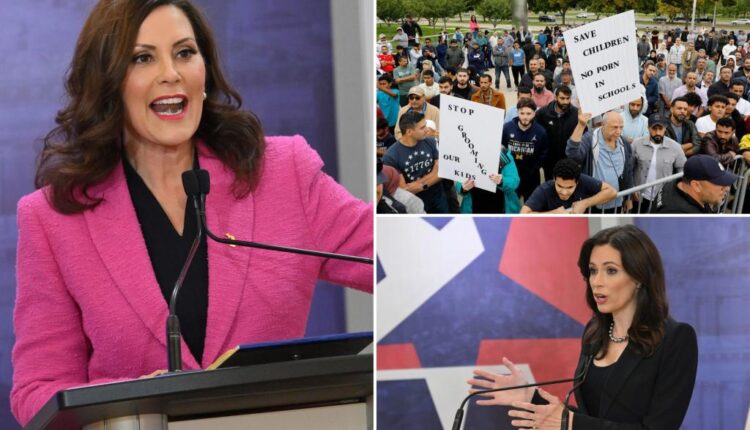 Virginia Democratic gubernatorial candidate Terry McAuliffe put the nail in his own campaign coffin last year when he said in the final debate, “I don’t think parents should be telling schools what they should teach.” In a state President Joe Biden won by 10 points the year before, Republican Glenn Youngkin defeated the former governor on the issue of parental rights in education.

Michigan’s Democratic Gov. Gretchen Whitmer had a “Terry McAuliffe moment” of her own Tuesday night — a couple, in fact. They might just lead to her own defeat.

In the Great Lakes State’s final debate, Whitmer addressed parental concerns about sexualized materials in schools her Republican challenger, Tudor Dixon, raised by asking — after a chuckle — “Do you really think books are more dangerous than guns?” She wrote off the worries as a diversion, saying Dixon “is trying to distract us” by “waging these fights.”

Does Whitmer think the parents who showed up in force to the school-board meetings in Dearborn, Mich., objecting to sexualized materials are just a distraction, too?

Worse, Whitmer tried to downplay her role in keeping schools closed during the pandemic: “You know, Mrs. Dixon says I kept students out longer than any other state,” she said, but “kids were out [of school] for three months.”

Her claim is patently false. Whitmer ordered Michigan schools to close for the remainder of the school year on April 2, 2020. After the governor lost her authority to issue executive orders, her health director issued an emergency order in fall 2020 closing schools for three weeks. In December, Whitmer’s administration extended high-school closures for two more weeks. In fact, Michigan Catholic schools sued the state in federal court for banning in-person instruction in public and private schools.

Some Michigan public-school districts continued locking kids out of an education the next year as Whitmer in January 2021 urged them only “to have an in-person option no later than March 1.” Detroit Public Schools extended the 2021 Thanksgiving break and closed their doors on Fridays in December. Detroit and Ann Arbor public-school students also had to deal with school closures in January 2022. Families in Flint found out that month that their children’s public schools were closing indefinitely.

Burbio’s School Reopening Tracker ranked Michigan in the bottom half of states, just ahead of New York, for reopening schools in the 2020-21 school year.

Many Michigan students were clearly out of school for more than three months. Whitmer backpedaled after the debate by saying she was talking only about the closures that directly resulted from her administration’s orders. But she did not push to require chools to reopen like Florida, Texas and Iowa governors did. On the contrary, her team pushed for the opposite.

Dixon at the debate responded, “Perhaps she wasn’t paying attention to what was actually happening. We even had schools that were closed this year. Maybe she thinks she can convince you that schools were only closed for three months, but you know better because your students are the ones that are desperately behind.”

Dixon is right. Parents know better. Families aren’t going to forget what happened to their kids over the past couple years. They experienced the struggles with school closures — and they’re still dealing with the harm these decisions inflicted upon their children.

The problem is Whitmer is owned by the teachers unions — and they fight against parental rights at every turn. The Michigan Education Association endorsed the governor and is one of her top donors. The Michigan affiliate of Randi Weingarten’s union, the American Federation of Teachers, has also funded and endorsed Whitmer.

Whitmer vetoed bills to empower Michigan families with school choice. And while she gaslights the public about her role in school closures, Dixon embraces parental rights in education. In her closing remarks, she said, “I will put parents over politics. I will put students over systems.”

RealClearPolitics pegs the Michigan governor’s race a “toss up.” But if the outcome of last year’s Virginia gubernatorial election is any indication, Dixon might soon be in position to put Michigan students first.

Corey DeAngelis is a senior fellow at the American Federation for Children.