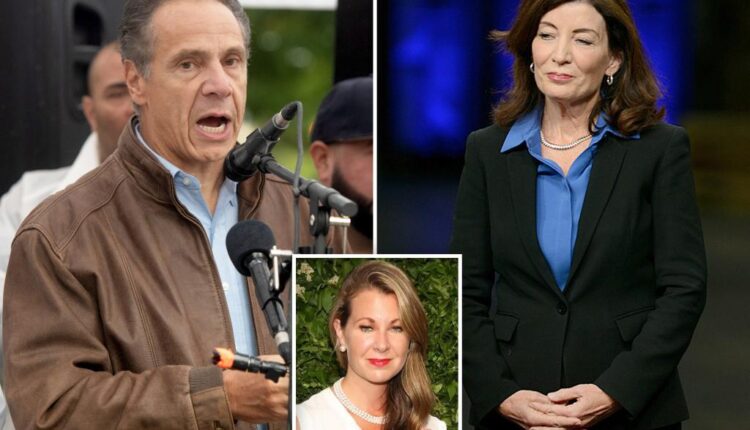 That is, why did Melissa DeRosa, a former top aide to ex-Gov. Andrew Cuomo, go on the radio this week to attack current Gov. Kathy Hochul — Cuomo’s personal gift to New York’s toxic politics?

Was DeRosa’s assault a de facto endorsement of Republican Lee Zeldin’s steadily strengthening gubernatorial candidacy? Or, if not, what would such an endorsement actually look like? DeRosa simply shredded Hochul’s absurd claim to be tough on crime — and in a campaign that revolves almost solely around New York’s chaotic streets, what else would there be to say?

“The reality is that people want to feel safe,” DeRosa told radio host John Catsimatidis Tuesday evening. “Yesterday morning somebody was pushed on the subway track. Hochul says she was going to make an announcement . . . and I was hoping they were going to say something about crime. She does a press conference about catalytic converters.

“Unless the politicians, Hochul specifically, get smart to this,” she added, “they’re going to have an uncomfortably close election day.”

DeRosa counseling pols to be “smart” simply is delicious: She was, after all, Cuomo’s top lieutenant — and look where he is today, and consider how he got there.

The hypocrisy is pretty ripe, too. DeRosa’s former boss didn’t design the criminal-justice “reforms” largely driving the state’s crime wave — malign credit there goes to the Legislature. But he supported the relevant bills, and then signed them. And while he had second thoughts as the magnitude of this self-imposed catastrophe became apparent, DeRosa is in no position to lecture anybody about safe streets.

But her analysis is correct. The crime stats speak for themselves, and Hochul has been dumb as a stump about them. Plus DeRosa is a political consultant these days, presumably in touch with prevailing public attitudes — and doubtless is courting future clients, even if that should hurt current non-clients.

And what better way for DeRosa to distance herself from policies she helped craft and defend than by hanging all the blame around Kathy Hochul’s neck?

Which brings us to another major irony — which is that the now-incumbent governor would still be a bit-player in Democratic politics had Cuomo not lifted her from Erie County obscurity in 2014. He needed a decorative, non-threatening second-term running mate — and who filled that bill better than Kathy Hochul?

Native talent, political dexterity, and the courage to stand up to ideologues having never been considered, it’s unsurprising that Hochul comes up short right across the board. In that sense, she is as much a victim of Cuomo’s self-serving cynicism as New York state itself.

But let’s not lose sight of what DeRosa actually said — never mind why she might have said it.

Is Hochul failing on crime, and public safety generally?

She’s been in office for some 14 full months, and the stat arrows point sharply in the wrong direction — and she not only has no obvious plan for dealing with that, but she also refuses even to talk seriously about it.

Let’s face it: Igor, er, Melissa is quite right about Cuomo’s creation. And if that’s not an endorsement of Lee Zeldin, it might just as well be.