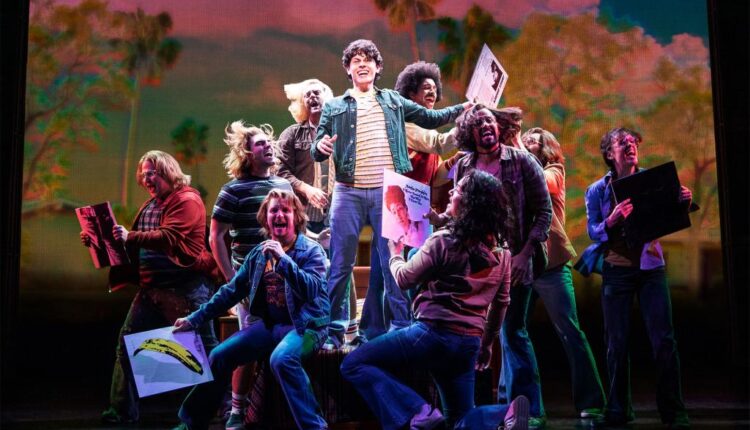 New York, New York, you’re a helluva town: Papua New Guinea’s Dr. Ken Labowe was here and previewed B’way’s new musical “Almost Famous.” It’s about an age 15 Rolling Stone writer. Next day, he’s in nearby Cosmic Diner and in walks the show’s writer, Cameron Crowe, who told him B’way’s stage is smaller than San Diego’s where it worked previously, so choreography got tighter. Also he killed a song sung by the character Frances McDormand played in the film.

All this was over breakfast eggs and rye toast.

Bird is the word

Mamie Van Doren — real name Joanie Olander — has done a book. The “Voyage to the Planet of Prehistoric Women” star has written “China & Me: Wing Flapping, Feather Pulling, and Love on the Wing” about her relationship with a Moluccan cockatoo she’s had for 50 years. Listen, the thing beats most husbands. Integrating a wild creature into a human household, matchmaking for it, caring for the bird’s offspring, a love story between a human and an animal ultimately becomes a metaphor for finding peace and happiness. If they don’t already get the bird, Vanilla Fire Productions says they’ll make this movie. As to who plays the cockatoo, who knows. Maybe NYC’s mayor?

Lucas Hunt, College of Auctioneering grad (who knew there was such a thing?), is tops at unloading everything — but info. Asked about possible auction thievery, he said:

“Good question. It’s a method of marketing property. In history, Greece or Rome have known thievery in terms of conquered property. However, Christie’s, Sotheby’s have high standards of ethics and representation, and deception is punishable by law. Auctioneers carry licenses. Auctions are marketplaces. Integrity is the basis of our business relationships.

“We always represent the seller and the buyer. We have phone bidders, online bidders, proxy bidders, absentee bidders. And an auctioneer’s No. 1 job is to always drive the crowd to spend more than they’re willing to do. Is marketing evil? Can we convince people to buy things that they don’t actually need? Yes.”

Yeah. OK. Right. And if you can figure out anything Lucas said you’re a better man than I am, Gunga Din.

With its many current miseries, Hollywood’s having fast repeat conflicted relationships. On one wedding night the quickie bride couldn’t decide whether to go to bed or watch TV. It was either “60 Minutes” or 60 seconds.