After the shooting outside his home, Rep. Lee Zeldin’s fight is now clearer than ever 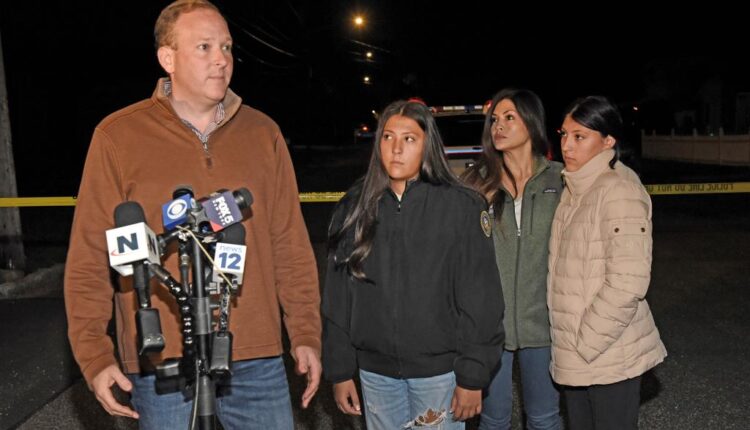 If you were making a movie about the underdog politician campaigning on soaring crime rates, you couldn’t have scripted it better than the shooting right in front of Lee Zeldin’s Long Island home Sunday afternoon.

Of course, it’s the last thing the Republican gubernatorial candidate and his wife, Diana, could ever have wanted.

Their twin 16-year-old daughters, Mikayla and Arianna, were home alone studying in the rear kitchen of the modest two-story house in the town of Shirley when they heard gunshots and screams right outside their front door.

The quick-thinking girls raced upstairs, locked themselves in a bathroom and called 911, and police soon found two unidentified shooting victims lying injured in the bushes below the front porch. A bullet was found nearby, just 30 feet from where Mikayla and Arianna had been sitting.

Once he had ensured the safety of his children, Zeldin knew exactly what to say: “My daughters are shaken, but OK. Like so many New Yorkers, crime has literally made its way to our front door.”

He told The Post last night on the phone that the girls were understandably “freaked out.”

“It hits us close to home when you read stories of other families being impacted by crime, when young innocent kids have been exposed to crime that they’ll never forget for the rest of their lives.

“Something bold and significant needs to be done to make life in New York safe again. It’s not just a story we read about every few days or weeks. This is happening throughout the day, every day, in New York. It hits as close as it gets when it shows up at your front doorstep.”

Just 24 hours earlier, The Post had been sitting on Zeldin’s front porch interviewing him about crime, a few feet from when the apparent gun battle occurred.

Zeldin’s law-and-order pitch has never been a game for the former congressman and state senator.

It’s become a reality in the working-class neighborhood he lives in and where he grew up, as it has for every New Yorker.

The Zeldins have had to travel to public places with security — usually retired NYPD cops with their eyes on swivels — ever since an attack on the congressman at a veterans’ event in upstate Fairport in July.

In that frightening incident, New Yorkers got a glimpse of the mild-mannered Zeldin’s core of inner steel.

A former paratrooper with the 82nd Airborne who served in Iraq, and a one-time world-champion black belt in karate, Zeldin instantly neutralized his attacker by grabbing the wrist of the hand lunging at him with a sharp knuckle-duster-type weapon.

“Muscle memory” is how Zeldin described his quick response, with characteristic understatement. He isn’t one to big-note himself, and actually claims he was a bit slow to react because he dropped his guard when he saw the attacker coming toward him was wearing a veterans’ cap. He hopes the attacker, a veteran with mental health issues, gets the help he needs.

Zeldin’s campaign already was focused on crime, but with problems in New York fast spiraling out of control — and now on his doorstep — the issue has taken on outsize significance a month before election day.

He closed the gap with Gov. Hochul last week to just two points, according to a Trafalgar poll. Even less bullish polls show he has the momentum against his better-funded opponent.

After The Post spent Saturday with him and his family, it’s easy to see why he could be headed for an unlikely victory in a fed-up state that hasn’t elected a Republican governor for 20 years.

Firing Manhattan District Attorney Alvin Bragg on Day One is an example of the latter.

Calling out the unelected Hochul as even more “corrupt” than her predecessor Andrew Cuomo is another.

Make DAs do their job

He backs up his tough rhetoric with evidence and clear, methodical policies to fix the problems.

“We need to roll back the pro-criminal laws,” he says.

“We need to hold DAs accountable who are refusing to enforce the law. And we need to unapologetically back our men and women in blue.

“I have pledged my first act the first day that I’m in office is turning to the Manhattan District Attorney, Alvin Bragg, to notify him that he is being fired.”

He also has plans to restore cops’ “qualified immunity,” a policy that protects them from being personally sued if an arrest goes wrong.

Zeldin’s affinity with the blue has its roots in the fact he was raised in a law-enforcement household — actually, two, since his parents divorced when he was young and he divided his time between living with his mother — who had remarried a State Trooper — and his father, who remarried a corrections officer.

He also has a secret weapon as his running mate, aspiring lieutenant governor Alison Esposito, the formidable former commanding officer of the 70th Precinct in Brooklyn, with nearly 25 years of service with the NYPD.

Their law-and-order pitch is winning converts from the Democratic Party, like Sam Esposito (no relation), a former cop and president of the Ozone Park Residents Block Association.

“I’m a Democrat but I’m not happy with the Democratic Party so I’m voting for [Zeldin]”, he said.

“All my friends and family were all Democrats, but everyone is fed up with Hochul.

The bail reform should have been thrown out and started over again because it’s a mess.

“To be honest with you this is about safety. We just had a shooting here — four young people got shot at the 88th Street park. I witnessed people running out of the park screaming and running for their lives and crying because of gunshots . . .

“Society is falling apart. People are scared and people are moving out. We’re a mess.

“I am a civic leader, so I do know what my people want and they want to live in peace and harmony.”

The one man who can make a difference just had his own family’s peace and harmony shattered on a quiet Sunday afternoon. That has only made Lee Zeldin more determined than ever to save New York.

NYPD Chief of Department Ken Corey wanted to make sure we know that the illegal migrants were not being inconvenienced in any way when his officers inspected the buses bringing them to the Port Authority from Texas.

“We did not stop buses carrying passengers,” he told reporters Friday. “No one was detained or inconvenienced other than the drivers.”

But hang on. In a city rife with crime, why is the NYPD wasting resources harassing these bus drivers?

Huh? Let the feds enforce their regulations. Call in the FBI. They seem to have a lot of spare time to harass pro-life people in their homes.

Why were there no cops at Westchester airport giving J&F Tours charter buses a good going over? They were sending three buses a night for every one of Joe Biden’s secret migrant flights that have been coming for more than a year, as frequently as five times a week for periods.

J&F Tours hung up the phone whenever The Post called them. They whited out their name on their buses to hide from The Post’s photographers. They must be ashamed of something. At the very least the cops could have fined them for speeding to evade The Post.

The planes seem to have given up on Westchester lately. But they’re still coming into Stewart International and Montgomery airports.

Time for law enforcement to pay attention to these clandestine operations since the clowns who pass for our politicians are turning a blind eye.