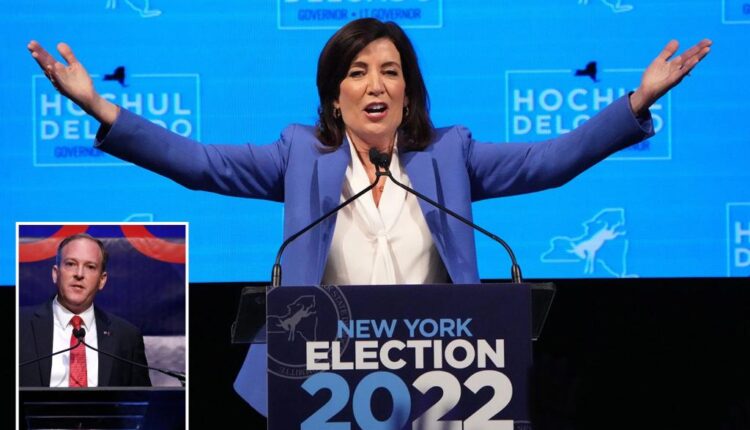 If not now, when?

If a Republican cannot win New York in circumstances that were nearly ideal, it’s hard to imagine what it will take to flip the state red.

It’s now 20 years and counting since George Pataki won his third term in 2002, marking the last time someone other than a Democrat won a statewide race.

One-party rule has driven the Empire State into the ditch, and now it can’t get out.

Don’t blame Lee Zeldin. The Long Island congressman focused like a hawk on the bread-
and-butter issues, especially crime. He outworked Gov. Hochul day in and day out for months, with his schedule of events a veritable road map of the enormous state.

Compared to the last four gubernatorial victories by Democrats, he made it
relatively close. Early-morning returns, though not final, showed the GOP picking up at least two more House seats and whittling down the Dems’ super-majorities in the Legislature.

But the governorship was the big prize, and Kathy Hochul managed to keep her job and become the first woman elected to run the state.

Like her campaign, her victory speech was a nothing-burger.

“We’ve achieved so much in just one year,” she claimed.

Then this, “Together, we’re moving on.”

Where to? What’s the agenda, besides all abortion, all the time?

The tragedy isn’t that she won, but that she won without addressing any of the major problems, let alone vowing to do something about them. She has no mandate except not to be Andrew Cuomo.

Zeldin, like Republicans nationally, had the wind at his back. President Biden is a failure and the policies he and the Dem-led Congress force-fed the country are directly responsible for the mess the nation faces.

Crime, inflation, the sinking economy, the open southern border, a perception in the world
that America is a weak and unsteady ally and adversary. These are not disasters Biden inherited — they are disasters he created or expanded and each directly impacts life in New York.

Couple that with the lack of enthusiasm for Hochul and the time seemed ripe for a course correction. But the Dems’ registration advantage of more than 2 to 1 proved insurmountable.

Indeed, that gap has widened considerably since Pataki’s 2002 victory, a sign that a robust two-party system will remain elusive here, perhaps for years to come.

For her part, the accidental governor never quite got the hang of the solo act. As polls showed Zeldin closing in on her, party bosses surrounded her with political star quality, such as the Clintons and even Biden himself, to attract crowds and create energy.

The result was that Hochul looked like a guest at her own events and often seemed uncomfortable. Earlier, she had agreed to just one debate, suggesting she believes silence suits her best.

Until the closing days, she rarely ventured beyond the rope lines of official government events, giving the Rose Garden strategy a new level of imperiousness.

When she did speak, it was usually a suggestion of a promise to do something about something without an actual commitment. Most troubling, she mocked, downplayed, and dodged the crime issue, acting as if nobody would notice it if Zeldin hadn’t brought it up.

She was wrong, and he was right, but in the end, it didn’t matter. Such is life in blue New York, which can now resume its steady decline.

Can Gov. Kathy Hochul set NY on the right track?