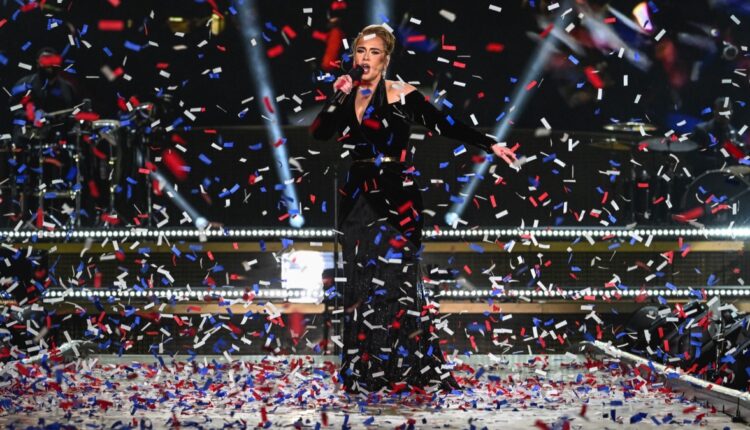 The 34-year-old singer postponed her Las Vegas residency in January just 24 hours before the opening and claimed COVID-19 had rendered her show impossible to put on but is set to eventually take to the stage for the sold-out four-month run of ‘Weekends With Adele’ and the price of resale tickets on StubHub has reached almost £40,000 ($46,000), in what has been called the priciest residency to ever hit the Strip.

Brodie Cooper, of US PR firm PRrppd, told The Sunday People: “Websites would not charge those fees if people were not willing to pay those sums. Without a doubt, Adele’s ticket prices are by far the highest ever in the history of the Las Vegas strip.”

The price of the second-hand tickets marks a record for the ‘Someone Like You’ hitmaker, with the cost of them said to have eclipsed the likes of previous Las Vegas residencies headed up by the likes of fellow industry legends like Celine Dion and Britney Spears.

The cheapest price for a seat at the Colosseum at Caesars Palace is £579 ($672), which was the most expensive ticket when the tickets first went on sale through the official channels, while the back row seats were priced at £79 ($91).

The news comes just days after the GRAMMY Award-winning songstress was said to have “stripped back” the designs for her residency in an effort to better “connect” with the audience.

A source explained: “Adele has revised her plan for the show, has stripped it back. The production will be very classy, the show is centred on her energy and vocals. The January shows had room for a significant orchestra and band along with a 60-piece choir. The feel was big, grand and immensely theatrical. Now she wants it to be more intimate and to connect to the audience by being in with them during the performance. Adele wants to make her mark with this show and be regarded as one of the greatest ever headliners in Sin City.