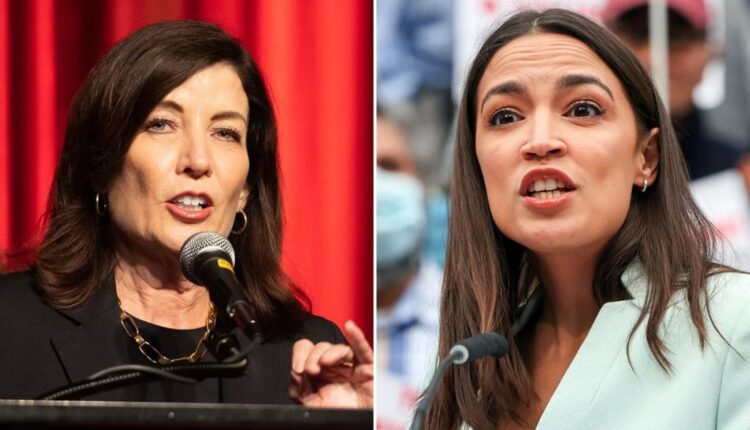 Nothing in life is free. So what price will progressives extract from Kathy Hochul, now that they are giving the beleaguered incumbent help as Lee Zeldin surges in the polls?

And what will their price cost us — the New Yorkers who actually have to pick up the tab?

The Working Families Party, which called for an “emergency all-hands-on-deck meeting” of its leadership earlier this week to mobilize in favor of Hochul, will have undoubtedly extracted concessions from the campaign in exchange for their last minute efforts.

The radical AOC wing of the party loves their free stuff. Free college! Paid for by other people’s taxpayer dollars. Free rent! Paid for by landlords who still have to pay their mortgages, gas, water, electric, and insurance bills. Free subway rides! Paid for by those of us who still swipe our metro cards.

Why do working-class people always get stuck footing the bill for the luxury beliefs of progressive Democrats, who are increasingly the party of elite educated, laptop-class remote workers?

Criminal Justice Reform made sense to many voters because real injustice happens in our courtrooms. The outcome of a case should not depend on the size of your bank account and ability to pay bail. That was, and is, wrong. But we could have fixed that without throwing open the jail doors and turning the court system into a revolving door.

Likewise, compassionate New Yorkers don’t want to see people sleeping on the streets and begging for food, but real concern for the homeless was leveraged into corrupt multi-million contracts for hotel conversions and expensive programming that did nothing to halt the spiraling homeless numbers in our city.

The very progressives whose policies are destroying New York, are now riding to the rescue of Gov. Hochul, who already backed their worst laws and reforms: Eviction moratoriums, bail reform, parole reform, and of course, closed schools.

A vote for Hochul is now a vote for unbridled AOC style progressivism.

And if Hochul gets elected, we get a doubling down on all their bad ideas. Of course, the alternative is to vote for Lee Zeldin — even if you don’t agree with him about everything. Agreeing that we should be safe on the streets and subways, that criminals should go to jail and that children should be in school, that pandemic mandates and restrictions must finally end, that rents should be affordable and taxes lower seems like a good place to start.

Maud Maron is a co-founder of Parent Leaders for Accelerated Curriculum and Education (PLACE-NYC) and former Democratic congressional candidate.