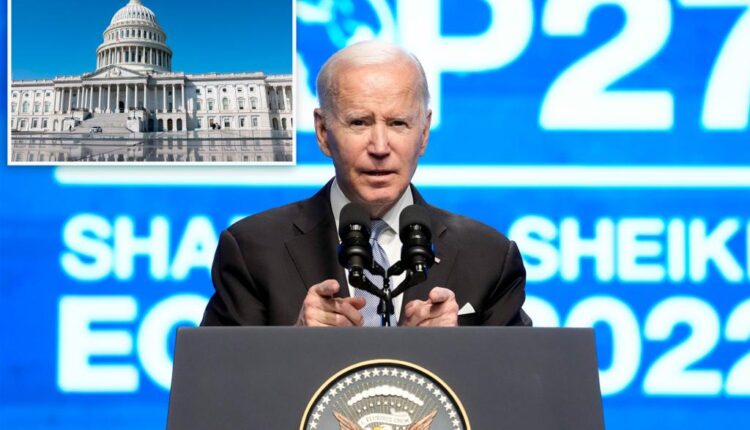 The likely election of a Republican House majority is good for the economy, good for Republicans — and even good for President Biden.

Inflation cooled last month, but remains at 7.7% over the past year — and a staggering 14% in the 20 months since President Biden was inaugurated. Real wages have fallen approximately 4%. And the stock market — even with a strong week — remains down 16% for the year.

The Federal Reserve is doing the heavy-lifting on inflation, and has already hiked the federal funds rate from near-zero to nearly 4%. This has pushed up mortgage rates from 2.6% to 7.1%, and combined with rising house prices to double the monthly mortgage on a new median-priced home, from $1,148 to $2,445.

Rather than force the Federal Reserve to slam the economy’s brake pedal fully into recession, Congress and the White House need to enact policies to help pare back inflation in a pro-growth manner.

Most destructive of all has been the president’s historic spending spree, which has added $4.8 trillion to the 10-year budget deficit. The Federal Reserve calculates that the President’s $1.9 trillion American Rescue Plan was a major inflation contributor. The student loan bailout — if it survives legal challenges — will push inflation even higher. That will force the Federal Reserve to further rate-hike the economy into a likely recession, with significant job losses.

And that is why it was so important for Tuesday’s voters to stage an intervention and take away President Biden’s credit card. While the results were less than expected, the current vote counts show that the majority of voters chose a Republican House, with inflation and the economy their top concerns.

Republicans may not have produced a comprehensive anti-inflation agenda, but their most valuable weapon will be gridlock. While Biden has already enacted $4.8 trillion in new spending, he had proposed a staggering $11 trillion during his 2020 campaign. Any chance of enacting the final $6.2 trillion in remaining promises — digging the inflation and deficit ditch even deeper — is almost surely dead with a GOP House.

Ironically, this may be the best outcome for President Biden. The past two years of partisan Democratic overreach drove the president’s approval rating to among the lowest of postwar presidents. Perhaps the president will become the moderate Americans thought they elected, rather than the Elizabeth Warren-clone they got instead.

We’ve seen this story before. President Obama spent his first two years teaming up with a Democratic Congress to enact a trillion-dollar stimulus bill and ObamaCare. Then the 2010 “shellacking” brought a GOP House that clipped Obama’s most liberal wings and ultimately helped him win re-election. Before that, President Clinton and his Democratic Congress overreached on government spending and health care, until the 1994 election of a GOP Congress brought back the successful “New Democrat” that voters had wanted all along.

President Biden may or may not run for re-election in two years. However, with inflation still elevated, interest rates soaring, and budget deficits likely headed towards $3 trillion within a decade (yes, you read that right), he and other politicians will have to abandon the lazy politics of Santa Claus. Even “free spending” brings a painful cost.