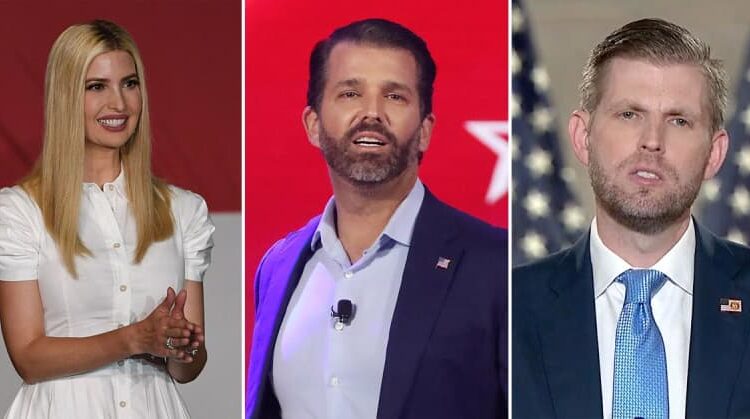 Tiffany Trump‘s wedding was most definitely a family affair! On Saturday, November 12, the Georgetown Law alum’s older siblings, Ivanka Trump, Donald Trump Jr. and Eric Trump, along with their families, were on hand to celebrate their little sister’s nuptials to Michael Boulos at Mar-a-Lago in Palm Beach, Florida.

All three of Donald Trump‘s kids shared photos on Instagram of Tiffany’s big day, with each of their broods wearing coordinating black, white and baby blue outfits.

“Great time with the Smurfs at Tiffany’s wedding yesterday. The little ones were all in it and were perfect… not that there was ever any doubt. 😉,” Donald Jr. penned on Sunday, November 13, alongside snaps of himself with kids Kai, 15, Donald Trump III, 13, Spencer, 10, Tristan, 11, and Chloe, 8.

The businessman also made sure to show off fiancée Kimberly Guilfoyle, who joined the right-leaning family to celebrate the newly married couple.

Meanwhile, the fashion designer, who served as Maid of Honor, shared pics with her husband, Jared Kushner, along with their children, Arabella, 11, Joseph, 9, and Theodore, 6, on the lavish Florida property before the big event.

Eric also posted loving photos with wife Lara Trump and kiddos Eric, 5, and Carolina, 3, including one where he plants a huge smooch on his son’s cheek.

The wedding — where the 45th President’s current spouse, Melania Trump, and ex-wife Marla Maples were also in attendance — appeared to go off without a hitch after Hurricane Nicole threatened to ruin the life milestone for the youngest Trump daughter.

As OK! previously reported, Tiffany was “flipping out” ahead of her special day as her father’s resort was shut down in the days leading up to the wedding.

“They’ve sent staff home,” an insider revealed during the uncertain time period last week. “Tiffany is still there. Some guests came in for the week, and they had all these things planned. It was going to be a whole over-the-top thing. They had to cancel events today and canceled a golf outing for tomorrow. Everyone is stuck inside.”

“Friday is supposed to be a welcome dinner and they aren’t sure it’s going to happen … Tiffany is flipping out,” the source dished prior to the ceremony.

Apple is pushing a rare discount on Macs for small businesses