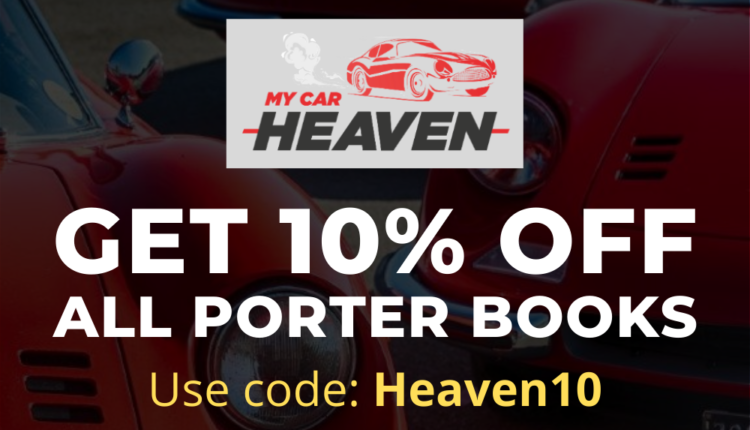 If you’ve never heard of Porter Press, where have you been. Porter Press are one of the leading automotive publishers. We wanted to highlight 10 wonderful books, in no particular order, that would make a wonderful Christmas present or present for the petrolhead in your life, or for you if you are that petrolhead. Also we are delighted to inform you that we have secured a 10% discount on any book you purchase (see below).

So here you have 10 selected books that you may want to purchase:

Two editions – Standard Edition (£30) & the Special Launch Edition (£45), signed by author, Martin Port and chief restorer, Julian Shoolheifer, which is limited to 1000 copies. Please click on the drop-down to make your selection.

JUE 477 was awarded the inaugural trophy for Best Publication with a Land Rover theme at the National Land Rover Awards at the Land Rover Legends event, Thruxton Race Circuit 12-13 June, 2021. It has also been Octane magazine’s Book of the Month (December 2020 issue) and was nominated as Publication of the Year for The Historic Motoring Awards and shortlisted for the Royal Automobile Club Motoring Book of the Year in 2021.

From 1980 to 2000, Camel Trophy took more than 500 amateur competitors from 35 countries on extraordinary and challenging adventures. On most of these events, teams drove specially prepared Land Rovers to the limit and beyond in locations as varied as Borneo, Mongolia, Papua New Guinea and Tanzania.

Camel Trophy charts the history of the event and tells the legendary stories of endurance born of the constant challenge to both man and machine. An official photographer on the last four events, author Nick Dimbleby combines his first-hand account with experiences shared by competitors, contemporary reports and extensive new interviews of key players, to tell a gripping tale of adventure, adversity, technological change and logistical challenge. Beautifully illustrated throughout with a stunning collection of evocative official photography and unofficial behind-the-scenes shots, this extensively researched publication can legitimately claim to be the definitive history of the Camel Trophy.

Twenty-five years on from its famous début victory in the 1995 Le Mans 24 Hours, the wonderful McLaren F1 GTR is the subject of this major two-volume history. Derived from the BMW V12-powered three-seat McLaren F1 road car, the F1 GTR only came into existence because of customer pressure on designer Gordon Murray to produce a racing version. With 28 examples built over three seasons, the F1 GTR was fabulously successful, winning 41 of its 131 races and taking two international championship titles. This sumptuous book outlines the life of the McLaren F1 GTR in exhaustive depth, with Volume 1 devoted to race-by-race narrative and Volume 2 to individual car histories and the stories of the people who raced them, all supported by over 775 colour photographs.

Tells the story of patriotic racing driver Raymond Mays’ ambitious plan during the late 1940s to harness the power of the British automotive industry and create a new Formula 1 car with which to break the domination of teams from continental Europe. Having founded ERA before the Second World War, Mays introduced for this latest project another set of initials that would pass into motor racing folklore: BRM – British Racing Motors.

Unleashed in 1982, the Porsche 956 became the most successful purpose-built race car in history. Over the following decade, the 956 and its later long-wheelbase version, the 962, would win five consecutive world championships, as well as every single classic sportscar race in the world a record number of times: the Le Mans 24 Hours seven times, the Daytona 24 Hours six times and the Sebring 12 Hours four times, plus 39 world championship events and 55 IMSA races, to name but a few of its remarkable achievements. Many of the successes were achieved by works-entered cars, almost always in the iconic white-and-blue colours of sponsor Rothmans, and they form the focus of an extraordinary body of work researched and written by author Serge Vanbockryck over the past 30 years. This is the first part of his project, a two-volume production about the Works 956s, with a second such title on the Works 962s also now available to purchase.

“If any car deserves a 1400-page ode, the Porsche 962 is it. What an astonishing achievement this is.” Motor Sport (UK) (read full review)

“If you could get a PhD for the Porsche 962, then author Vanbockryck certainly deserves the Doctoral degree. […] As far as we are concerned, the Porsche book of the year!” RS Porsche Magazine (read full review)

Quarter-bound in red leather, the black fabric-covered hardback limited edition of Ultimate Works Porsche 962 features silver foil script and is presented in a black fabric bound slipcase. The print run has been limited to 962 numbered copies.

3 hardback volumes within a slipcase

The Ferrari F40 wowed the motoring world when first unveiled in June 1987. The model took its name from the ‘F’ of Ferrari and ‘40’ as a celebration of the 40th anniversary of Ferrari car production.

Customers could have an F40 in any colour they liked, as long as it was red! It was fast, radical in appearance, and bereft of interior appointments, with a totally minimalist approach and extensive use of composite components in its construction, with a 478bhp, twin-turbo, 2,963cc, 90° V8 engine.

Competition examples competed successfully in top-level national and international racing from 1989 to 1996.

This lavishly produced book, covering every aspect of the F40 in-depth, is essential reading for all motoring enthusiasts.

Claude Nahum was brought up surrounded by all things automotive. The son of Bernar Nahum, considered to be the father of the Turkish automotive industry, Claude was fascinated by cars and engineering from an early age. Claude’s career led him into automotive design, research and engineering, before eventually heading and growing the Kiraça group trading company in Europe, all the while maintaining his link with the automotive world. As Claude’s career progressed, he began collecting and racing cars, and the growth of his stable led to him establishing The N Collection. Wishing to create a distinctive tribute to his favourite cars, Claude commissioned six leading artists, and gave them free rein to depict each of 25 cars from his collection in their own inimitable style.

Published in support of cancer charity Hope for Tomorrow, Drivers on Drivers features some of the greatest names in motor racing speaking candidly about their biggest rivals as well as their heroes, teammates and friends. It is a unique concept, with those interviewed ranging from legends of the 1950s such as Tony Brooks and 1960s rally icon Paddy Hopkirk, to Derek Bell, Mika Häkkinen, and current superstars such as Sir Lewis Hamilton.

Each driver is in conversation with a leading motorsport writer or broadcaster, and the book is illustrated with stunning photography throughout.

2019 marked the 50th anniversary of the British cult classic movie The Italian Job. Loaded with sixties swagger, and famed for its endlessly quotable dialogue and one of the most impressive car chases in movie history, The Italian Job is the ultimate celebration of ‘cool Britannia’.

Based on more than 50 in-depth interviews with the cast and crew, and lavishly illustrated with hundreds of never-before-seen photographs and production documents, this new book takes a fascinating, behind-the-scenes look at how the film made its way to our screens.

Awarded the prestigious Motoring Book of the Year by the Royal Automobile Club. Judge Mick Walsh from Classic & Sports Car said “A remarkable celebration of this cult movie classic that author Matthew Field has researched passionately since his teenage years. Bloody brilliant!”.

Foreword by Sir Michael Caine and an introduction by Oscar-winning producer Michael Deeley.

I hoped you liked our 10 featured books, I hope you find a great book to add to you or your loved ones collection. Remember to add our 10% off discount code if you are buying a book or two.

How to download and install macOS 13 Ventura on your Mac

What Are The Car GPS Trackers And How Do They Work?

Everything You Need To Know About All-Season Tires